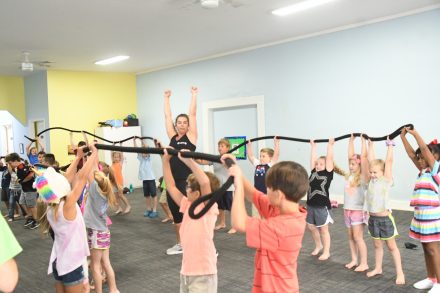 Dawn Richardson shows the campers how to stretch with the ropes brought in from the Lift gym.

Kicks after-school program and summer day camp is learning all about careers this week, as their theme is dress for success.

Tuesday morning the campers were greeted by The Lift Fitness Instructor Dawn Richardson.

Richardson got the kids up and active, playing tug of war, doing jumping jacks and crunches, along with lunges, frog jumps, bear crawls and superman. She informed the kids about how many bones and muscles are in the body and at what age their bones and muscles stop growing.

She promoted physical fitness and exercise, explaining how it is important to young children’s growth and how it makes their bones and muscles stronger.

Camp leader JoAnna Eakin said following Richardson’s program, the campers would later hear from firefighters and get to explore the firetruck. Additional career paths will be introduced later in the week.