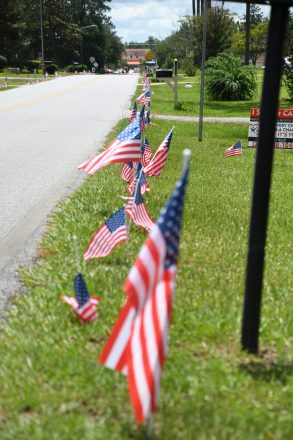 Those passing by the Douglas Drive area may have recently noticed the hundreds of American flags lining the streets in preparation for Independence Day. However, the flags play a much larger role and also honor the memory of the late Captain Justin Bedwell.

According to Bedwell’s wife, Katherine, she and her daughter, Maddie Chapman were recently talking and Maddie asked if they could do something special to remember Bedwell, because he loved the Fourth of July.

Katherine said about mid-May, she and Maddie began collecting small flags they planned to line the street with. Katherine approached the neighbors, who soon got involved and also began collecting flags for Maddie and her mom to plant in the ground.

Soon, the mom-daughter duo had enough flags to line both sides of the street and honor Bedwell’s memory in a way he would have loved.

“The goal was to really do something nice and get our whole neighborhood involved,” Katherine said.

Since lining the streets, Katherine said her daughter has asked numerous times to ride the street just to see all the flags.

“It really makes her heart happy to see this and these days that’s what we need,” Katherine said.

Katherine added that this small gesture was truly a great way to celebrate Independence Day and honor all of those, including her late husband, who have sacrificed so much to protect the individuals who call Bainbridge home.