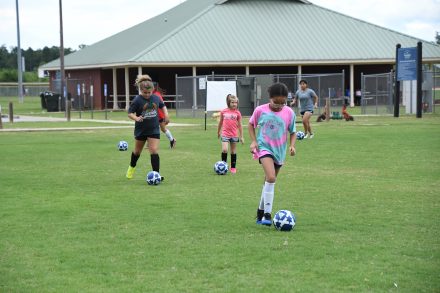 Above, Nora leads the pack in soccer drills, while Finley Avery and other campers follow her

Led by Toluca Academy Director Fernando Tlacuatl and sponsored by Sarmiento’s the camp was open to the community and touched on the fundamentals, while also requiring the participants to take on top-level workouts and drills.

“We wanted this camp to be well-rounded,” Tlacuatl said. “We do a lot of progression, so the kids who are just touching the ball for the first time can leave a lot more comfortable.

Tlacuatl said they worked with boys and girls of every skill level individually, but emphasized the importance of team work.

“We did a lot of team work workshops,” he said. “We wanted to work with them collectively as well, not just individually.”

The teamwork was of utmost importance on the final day of the camp, when the boy’s camp and girl’s camp came together for a scrimmage game.

The boys and girls were mixed in together in age groups of elementary schoolers, middle schoolers and high schoolers before taking on their opponents.

“We want them to work together, but we also really want it to be fun and welcome the little guys into this sport,” he said. “It’s a demanding sport, but it has fun times as well.”

Tlacuatl said he was very pleased with the turnout of the camp.

The same thing would occur in the afternoon at the girl’s camp.

Tlacuatl said he and the other coaches would arrive at 5 p.m. to prepare for the girl’s camp at 6 p.m., but by 5:30 p.m. most of the girls would have already arrived and be ready for the day’s activities.

The afternoon would usually begin with a series of stretches and footwork exercises. It would then move into a series of obstacles players had to do, while maintaining composure holding the ball with their teammate or group, before a quick water break and back onto the field for drills and mini games.

Finley Avery, 6, was one of the participants who loved the camp.

“My favorite part was learning the new drills,” Avery said.

Avery said she also learned some new things about the game.

“When the ball is on another field, you’re allowed to walk,” she said.

Avery, along with approximately 30 other girls really appreciated the opportunity to learn under Tlacuatl and take their newfound skills with them to the next season of soccer.