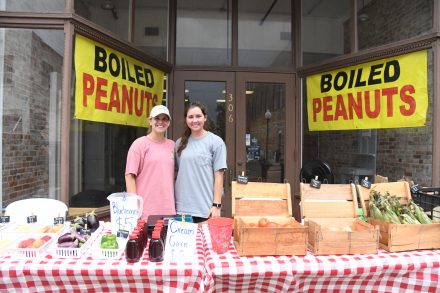 Kelsey Harrell and Delaney Mueller have been running a produce stand for the past four summers while they were home from college. Customers grew fond of the two young women, messaging them to ask when would they return and what their plans were post-graduation.

Harrell said last year, specifically, customers asked if she would ever consider opening up a store full-time when she graduated from Mercer University.

Originally, Harrell told the customers she would think over it, but put it on the back burner.

However, when she really thought through the process and saw the boom in downtown, she knew it was time to take the dive and open up a location full time.

Harrell and Mueller have already had a soft opening this month, showcasing their fresh vegetables and fruits, but with their hard opening approaching in August, they have plans for even more.

“When we open our store in August, we will still have produce, but we want grain and grass fed beef and chicken, fresh cheese, eggs, milk, bread and we will have soaps, oils, jams, syrups, honey and cut flowers,” Harrell said.

They have additionally made a candle with the Refinery that will be offered in their store. Harrell also clarified that the cut flowers may not be something they offer every day, but could potentially be a special. She wants guests to be able to enter the store and make their own flower arrangements for their home or restaurant.

The storefront finally coming to fruition is the epitome of hard work and dedication.

Harrell said she originally began the produce stand in order to sell boiled peanuts and have money for college.

“I began on a whim,” she said. “I had no idea anything about produce; I didn’t grow up on a farm or anything like that.”

Since then, Harrell said they have had such a loyal following and growth, they’ve had to expand several times.

While expanding, Harrell pursued her degree in Entrepreneurship and graduated with a Master’s in Business.

“That was one of the main reasons I wanted to come back here,” Harrell said. “I knew I could come back and open my own place and mix my talents with Delaney’s in order for this to be a success.”

Harrell has already seen an outpouring of love from the community, even though the storefront hasn’t had their hard opening.

“It’s been incredible the response,” she said. “We’ve had a really great turnout and seen some loyal faces, along with new customers and everyone who has come by has said how they can’t wait for us to open.”

Harrell said she is excited with the progress they’ve made so far and her long-term goal is to become a go-between for restaurants and farms, while still operating the retail space.

“We don’t want to bite off more than we can chew, but we would love to work with restaurants and farms,” she said.

Mueller agreed, stating that they want people to think of them as the new “one stop shop.”

Harrell invites everyone to stop by their new location on 306 Water Street and check out their offerings.