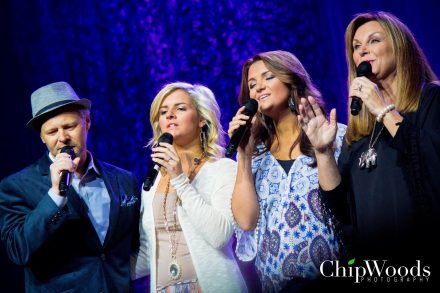 The Nelons will be singing at Fellowship Baptist Church in Brinson on July 18 at 6 p.m. The family will be part of a larger musical event hosted by the church.

Multi-Dove Award winning and Grammy nominated recording artist, The Nelons will be featured Sunday, July 18 at the Fellowship Baptist Church, located at 2861 Spring Creek Road in Brinson, Ga., as the popular musical group will be featured during the 6:00pm musical event.

The ministry of The Nelons was formed after family patriarch Rex Nelon had already enjoyed a spectacular 20-year career as a member of the legendary LeFevres. Throughout this distinguished career hit songs have flowed their way in bunches. The Nelons, who are members of the Gospel Music Hall of Fame, have been singing hit songs, bridging the traditional sounds of Gospel music with contemporary influences, and inspiring listeners of all ages for decades. The group, who has enjoyed much success as a part of the prestigious Gaither Homecoming Tour and Video Series, continues to cross generational gaps, presenting rich harmonies that have been embraced by audiences from all walks of life. The popular musical family earned the 2017 Gospel Music Association’s Dove Award for Bluegrass/Country/Roots Recorded Song of the Year for their hit release, “When Grandpa Sang Amazing Grace.” Most recently, The Nelons released Peace At Last on the Daywind Music label. This latest recording has already produced another Top 10 radio hit for the group. The single, “Jordan” is now playing at radio stations nationwide.

This exciting event promises to be filled with musical enjoyment for Gospel music lovers of all ages. “It will be a lot of fun,” states Kelly Nelon Clark. “Not only will we be singing the classics that have stood the test of time, we will also share many wonderful and interesting stories behind these timeless songs.”

Make plans to be a part of this special event with The Nelons at the Fellowship Baptist Church in Brinson, GA, on July 18 at 6:00pm. Complete information is available by calling 229-246-1364 or visiting www.thenelons.com.