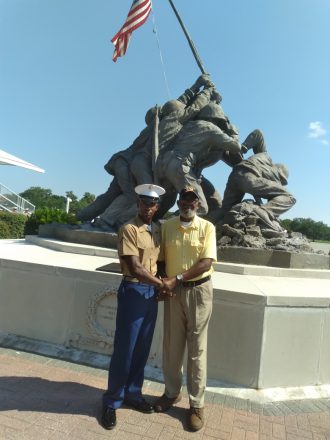 Rev. Adren Bivins stands with his son, Abraham Bivens after he graduated from the Marines Boot Camp during Father’s Day Weekend.

Private First-Class Abraham Thomas Bivins, now a United States Marine, is the grandson of the late Abraham Bivins & Hazel Sapp Bivins of Plant City, Florida and the grandson of the late Thomas Jefferson and Annie Hollie-Jefferson of Fowlstown, the great grandson of the late Mrs. Georgia Wright, and the son of Rev. Adren & Mrs. Sylvia J. Bivins of Bainbridge, Georgia. He is a 2009 graduate of Bainbridge High School and a former member of the Bainbridge High School Marching Band. He received a band scholarship and a scholarship from the First Flint River Missionary Baptist Association where he served as youth president to attend Concordia College of Selma, Alabama and he received an Associate’s Degree in General Studies. While a student he became the head drum major of Concordia College Marching Hornets Band. He also attended Concordia University of Wisconsin and received a B. S. degree in Criminal Justice. Abraham received a Master’s Degree in Social Work from Albany State University.

Abraham attended Lillian E Williams Elementary School where his father served as PTO president and also was a member of Cub Scout Troupe# 515 of Attapulgus, Georgia where his father, Rev. Adren Bivins was the cub scout leader. He also played YMCA football with his father Rev. Adren Bivins serving as his first football coach. He received a black belt in Taekwondo at the age of 7 under the leadership of Mr. Dan Kucera of Taekwondo Plus. He was baptized by Rev. Dr. T. E. Sanders, former pastor of Emanuel M. B Church. He now is a member of Salem M. B. Church, pastor Rev. Frank Deyounks.

After graduation from college, he worked as a Coach Counselor at J. Walter Wood, Jr. Treatment Facility in Montgomery, Alabama for two years. He was recognized for being an outstanding employee on several occasions. He wanted to further his education and serve his country by joining the U.S. Marines, which “was his childhood dream because it was the toughest branch.” Following the military steps of his late grandfather, Mr. Abraham Bivins who served in the Army in World War I as a military policeman, his father Rev. Adren Bivins who served in the U. S. Army also a military policeman, his late uncle Mr. Daniel Bivins of Plant City, Florida, his brother Mr. Anson Bivins of Quincy, Florida now serving in the U. S. Navy an uncle the late Mr. Malcolm Jefferson who served in the Navy, his cousins Mr. Alfi Jefferson retired Army Veteran of Bainbridge, Georgia and Mr. Laron Hamilton U. S. Army Veteran, an uncle Mr. Lloyd Griffin of Tallahassee, FL U. S. Army Veteran and his uncle, the late Willie King an Army and Navy veteran all gave him that extra incentive to make a choice to serve his country. Military runs deep on both sides of the family. It is a tradition of serving our country.

Abraham completed 12 weeks of strenuous hard basic physical and mental training in Parris Island, South Carolina. He was voted by his Platoon of Echo Company, of 61 Recruits and his Company Commander, Captain S. P Rayan to receive the Iron Mike Award. This award is given for selfless dedication, performance throughout recruit training, attitude and actions toward his peers and his platoon which contributed an environment in which he fostered high morale in order to build comradery and esprit de corps which exceeds the standards of his leadership above him and are keeping in the highest tradition of the United States Marine Corps. He is receiving further training in Artillery Training School in Camp Lejeune, North Carolina and also will be attending Officer Training School to become a 2nd Lieutenant. His plans are to go to Japan for three years. His M.O.S. would be a social worker in Administration.

The most important and special aspect of this journey is that Abraham joined the Marines shortly after his 30th birthday in February and was in Bootcamp from March 8th until he graduated on June 18, 2021 which, was the weekend of Father’s Day. He feels that this was the best Father’s Day gift he could give his father, Rev. Adren Bivins, Sr. who is the founder of the Laymen Brotherhood Second Chance Outreach Center, Inc. Rev. Bivins he has helped mentor many young men to get into the military, college, Job Corps and workforce and to get a second chance to make a positive difference using his professional wrestling career as the retired Black Assassin. His hard work as serving the community started with his own sons first, which allowed the seeds he planted in his son to reap the benefits of giving him the best Father’s Day gift he has ever had. He is very proud and thankful to see the fruits of his labor. It was also a great Mother’s Day gift for his mother Sylvia, who stood by him with much encouragement, prayer and support.

Abraham says his faith in God has gotten stronger and he continues to attend worship services every Sunday. The seed was planted early in his life. He said he is glad to defend his country where he is one of the few, the proud, the Marines. To God Be the Glory!