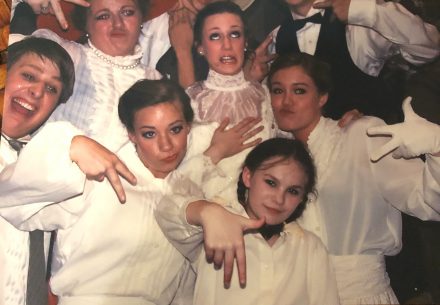 After a long week of acting, the cast of the Smith family drops the prim and proper act to have some fun. Actors included Kelsey Richter, Rachel Reynolds, Kaitlyn Spencer, Jill Holloway and more.

As with many stories we write about here at The Post-Searchlight, I’m often reminded of a time in my youth when something similar happened. This week was no different when I read about the opening of Matilda Jr. the Musical.

I loved acting when I was younger. I would put on shows for my family, have different voices and stories for all my Barbies and their “families” and participated in drama camps that my elementary school offered.

My first acting debut was in the fifth grade for our school’s Christmas program. I was cast as the role of the Virgin Mary.

My Gran-Gran to this day swears it was the highest honor any child could behold to play Mary, mother of Jesus.

I remember being very excited and practiced swaddling the baby and placing Him in a fake straw bed.

Later that Christmas, I was cast as the Angel bearing good news to the Shepherds for our church’s Christmas production.

Learning that speech proved to be a bit more difficult, as I was using words like “behold” or “Heavenly host” that were not in my fifth grade vernacular.

Nevertheless, I enjoyed it immensely and was excited for what my middle school drama days may hold.

As my sixth grade elective, I took drama instead of chorus.

That year, we performed Stuart Little.

We all had to audition and I got cast as a dual role. I played Mrs. Little and Margalo.

It was the highlight of my year. I was one of the main characters, Mrs. Little.

I had convinced myself I must be a pretty good actress and really threw myself into character.

My parents and grandparents came to opening night and the show went off without a hitch.

Little did I know that someone else was in the audience- our high school drama teacher.

Time passed and right as Christmas break was approaching, our drama teacher came and got me out of Study Hall one afternoon. She said she wanted to talk to me.

I thought I was in trouble, being called out of class by a teacher never led to anything good, up until this point.

She took me to the lunchroom, where the high school drama class was starting to read lines for their Spring musical, Meet Me in St. Louis.

I didn’t understand why I was there.

She explained the high school drama teacher was wondering if I would ever consider being a part of their program; they needed a younger girl to play the role of Tootie.

I was shocked; I didn’t even play Stuart, but now she wanted me on the stage with these real talents.

The high school drama teacher, Mrs. Cope, came over and introduced herself. She explained that she was impressed by me in the production and asked what I thought about the offer. I told her I was so excited, but she said I had to get my parent’s permission, because my schedule was about to change.

My parents were excited for my opportunity and approved it. By Christmas break, I had a song book and a whole script in hand.

At first it was all fun, but then as the play started nearing, the nights got longer and the homework was piling up. I no longer had a Study Hall because I was attending the high school drama class and my nights were filled with practices that no one else my age were partaking in.

My drama teacher started giving me some passes that allowed me to miss my homeroom to use that time to do homework or study.

Before I knew it, it was opening day.

The whole school came to see an early production.

I was the opening line and I distinctly remember my class cheering me on from behind the curtain before it was pulled open.

I had a tradition before every production, while getting ready I would go to the vending machine and get some chewy gobstobbers and a coke and then get into character, if you will.

“Getting into character” mostly consisted of someone braiding my hair into pigtails, before putting on my makeup, which I had not worn up until this point, and then attaching my microphone headset.

The show went off without a hitch and I received lots of hugs from the cast and crew. It was by far one of my favorite middle school memories and I don’t think I’ll ever forget it.

That musical ended my acting career, as I transferred schools afterward, but after a long hiatus I’m wondering if it’s time to step back into the world of acting at Bainbridge Little Theatre.

Those Old Toys are Worthwhile!

The Ideas Behind the Wizarding World of Harry Potter

Remembering the past while focused on the future