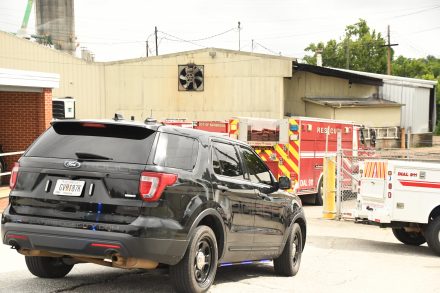 Bainbridge Public Safety officers arrived with the ladder truck and Hazmat truck to the scene on Thursday.

It was a rough Thursday morning for employees at Elberta Crate after two separate fires shut down the operation for a day.

E-911 received a call that morning at 10:05 a.m. for a small fire at the company and deployed Bainbridge Public Safety to the scene.

BPS Fire Chief Doyle Welch said a bearing went out, which sparked s small fire in one of the factory’s wood milling machines. Welch said BPS used their multiple, portable extinguishers to put out the fire.

The small flames caused minimal damage to the machine and the employees informed Welch they planned to clean up the debris and have the machine back up and running shortly for the day’s workload.

While putting out the fire and cleaning up the debris, embers that had fallen to the wayside got sucked up in the factory’s dust bin, then catching the dust bin on fire not even an hour later.

E-911 received another call from the factory at 11:12 a.m. reporting the dust bin fire.

BPS returned to the scene with their ladder truck, due to the height of the dust bin and used their deck gun to extinguish the fire.

The second fire caused more damage than the first and required the milling machine operations to close down for the rest of the day Thursday and possibly into Friday.

The employees in the milling machine operation were quickly evacuated from the scene and luckily no one was injured in either fire.