An All Around All Star of a Man 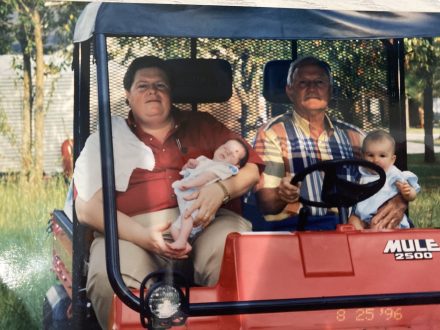 This past weekend, we celebrated Father’s Day.

While Father’s Day is typically only for your immediate father, step-father and grandfather, I want to take time out to recognize a man who played an important role in my life- my uncle.

Last month, while I was attending a wedding in Houston my Uncle Steve unexpectedly passed away.

For those who have read my columns before, you may remember that last year my uncle underwent surgery to amputate his leg. Since then, he has faced some infections, but also had some major triumphs.

He recently acquired a motorized wheelchair and was finding a sense of freedom he had not felt in some time. Much to my family’s fear, he would zip down lanes of traffic on the road to the nearest Subway, feeling like the King of the World in his new ride.

Unfortunately, that freedom was short lived.

He soon returned to the hospital with a bowel blockage.

Nothing seemed overly serious about this hospitalization. He was still updating the family group texts every day and complaining the nurses wouldn’t give him “real food.”

However, things took a turn for the worst one weekend when his liver and kidney began failing. He was soon on life support and the end was near.

Upon hearing the news, I tried to call him to tell him I loved him one last time and thank him for everything he had done over the years, but it was too late.

The past few weeks have been difficult to say the least, but what keeps me going are the endless amounts of memories I have with my Uncle Steve.

Growing up, Uncle Steve would often show up to my house unannounced on Friday or Saturday nights and ask my parents if my sister and I could come with him and his daughter Jenny somewhere.

There were countless trips to The All American Fun Park in his suburban.

He would sit at the snack bar, while providing myself, Alex and Jenny with dollar bills to get tokens and play games.

I remember one time I was so close to beating the high score on a virtual jump rope game, so Uncle Steve provided me with tokens and cheered for me until I beat it.

He was and always has been my biggest supporter.

My friends would always say they saw him at Waffle House over the weekend. He would take his portable DVD player up there and watch movies, while eating an All Star Special. Sometimes, Jenny and I would accompany him, but not for the movie.

Uncle Steve would give Jenny and I quarters to play our favorite songs on the Jukebox and we would sing them to the waitresses.

There was no uncle like him; that’s for sure.

He was a lover of Amtrak and took my sister, mother and I on our first Amtrak trip to New Orleans.

He made it so much fun.

We, along with my dad’s cousins and their children, grandmother, aunt and uncle all road in the sleeper cars with the children having their own room. He documented every moment on video camera, making sure it would never be forgotten.

I think a favorite family trip would be the time we impersonated him, though.

We were on a work convention trip and he and my dad had left Jenny and I in the care of her sister.

Her sister was at a neighboring girl’s hotel room, so Jenny put on her dad’s pants and I put on her dad’s shirt and got on her shoulders. We used a deep voice claiming to be “Callie’s father” and it was time for her to come back.

No one believed us, but we thought we were the epitome of Uncle Steve.

It seems like that was not all that long ago, but now I know it was truly a lifetime ago.

I couldn’t let this Father’s Day go by without sharing what this man meant to me. I am forever grateful I got to have him as a father-like figure in my life and I hope he looks down this weekend and smiles while enjoying an All Star Special in Heaven.