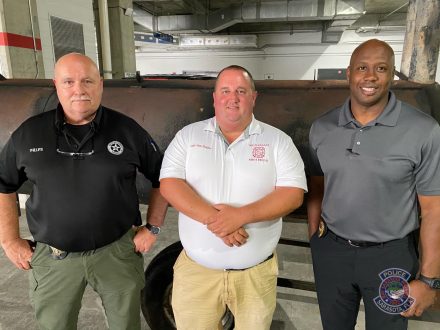 Almost three years ago, in August of 2018, a homemade grill and smoker was reported as stolen from the Mt. Pleasant Fire Department. It was briefly spotted in Thomasville, being pulled by a U-Haul. The suspected perpetrator, who goes by multiple aliases, referred to in a Patch article as Isaac Chapel, was tracked to Tampa and arrested two years ago, but the case has remained pending due to the pandemic. According to Decatur County Sherriff’s Investigator Terry Phillips, due to the ongoing nature of the case, there is much that can’t be disclosed at this time.

The grill was finally found and returned to Mt. Pleasant last Wednesday, after Investigator Phillips was contacted by the suspect’s lawyer. The grill had turned up in an unlikely place, a Jamaican restaurant in Sarasota, Florida. The restaurant owners insist they don’t know how it came to be at the restaurant.

Phillips and Volunteer Fire Captain Sam Hughes both traveled over 360 miles down to Sarasota to retrieve the grill. “We’re very happy to have the grill back,” Cpt. Hughes said. The Mt. Pleasant Volunteer Fire Department uses the grill and smoker once a year for their annual barbeque fundraiser. Fortunately, they had a second which they used in the interim. “We’re happy with the outcome of this, we’re happy with Investigator Phillips and the work he put in to get it back,” Hughes continued, “And we’re not only thankful, but fortunate. And we’re fortunate for the Sarasota police department for their role.”