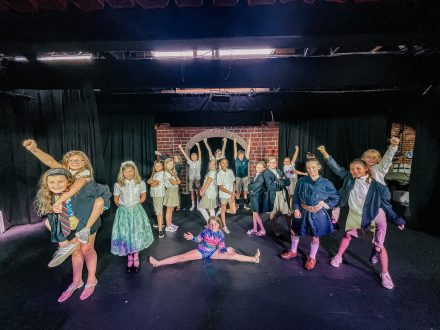 The story is based on Roald Dahl’s Tony award winning musical and tells the story of a young girl named Matilda Wormwood, (played by Brynlee Martin) who is a creative, imaginative girl. That helps her deal with an uncaring and overbearing home life, as well as a school headmistress who looks for trouble in every thing she and the other students do.

In spite of all that, the play is lighthearted and funny and the music is joyfully performed by an energetic cast.

Brynlee has been a student at Jones Wheat Elementary, who will transition to Hutto Middle School in the fall. She has appeared in other summer workshop productions, including Shrek. She said she enjoys theatre as it gives her a chance to make new friends. She admits to having an active imagination much like the character she portrays in the show.

The role of the tyrant headmistress, Agatha Trunchbull, is played by Alden Hill, who says she likes her role because “I get to be dramatic and sassy.” She also admits that it can be her personality “sometimes”. Hill also will attend Hutto in the fall and has been in other productions, namely Peter Pan.

The play is under the direction of Leigh Powell and Krystal Apke, with Katie Floyd as stage manager.