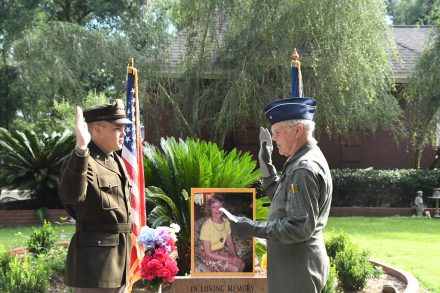 Wayne Lambert Sr. swears in Nathaniel Lambert at a private family ceremony in front of his late grandmother PeeWee’s memorial.

Lambert completed his 47 month experience at West Point and graduated on May 22, 2021 with a BS degree in Information Technology. Upon graduation, he was appointed an officer in the Army of the United States and commissioned as a Second Lieutenant (2LT) in the Field Artillery. His initial active-duty commitment is 8 years. After initial specialized training at the US Army Field Artillery Center & School at Ft. Sill, OK and upon completion of Airborne training at the US Army Airborne School, Ft. Benning, GA, he will transfer to his first field assignment. Lambert will be assigned to the 2nd Battalion, 377th Parachute Field Artillery Regiment (2-377 PFAR), 4th Brigade Combat Team (Airborne), 25th Infantry Division at Joint Base Elmendorf-Richardson, Anchorage, AK. The 2-377 PFAR is one of only 6 rapid deployment units in the active Army and the primary organic weapon system is the towed 105 mm Howitzer.

The commissioning oath must be administered by an active or retired member of the armed forces. Lambert was formally sworn-in on May 22 by Lieutenant Colonel Jason Moulton, one of Lambert’s electrical engineering instructors at West Point. It is customary for each officer to have a private family ceremony. On Thursday morning at 9:30, Lambert re-created the oath and commissioning because Lambert Sr. could not make the long journey to West Point.

At the re-creation, Lambert Sr. read out the oath and pinned Lambert in front of memorial honoring his late wife. Lambert Sr. then gifted him with a special pistol that he purchased through a military program. According to Lambert Jr., the pistol is only for Flag Rank Officers and Lambert Sr. purchased after he made General, and to his knowledge it has never been shot. The pistol also came with a special, General Officer belt and belt buckle that Lambert now has the privilege of carrying.

Lambert Jr.’s hope is that one day his son can pass on this pistol and belt to the next generation of West Point graduates.