Ellianos to open at Five Points on Thursday 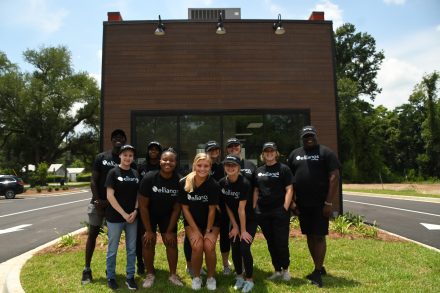 Ellianos employees finished up a day of training with a smile on Tuesday afternoon. They are prepared to open early Thursday morning to the public.

Bainbridge, Georgia, has become known for its soaring oak trees, sleepy Flint River, and antebellum charm, but soon it will also be known for its specialty coffee. Ellianos is set to open its nineteenth location at 723 E College Street in the Five Points district of Bainbridge. The drive-thru coffeehouse will officially open to the public on June 17, where the residents of Bainbridge and the surrounding areas will finally be able to satisfy their coffee fix.

Ellianos is a drive-thru coffee franchise that is climbing in notoriety for its specialty coffee. Customers can easily find something the whole family will love – whether it’s a Cookies & Cream Freezer, smooth Caffé Dolce latte, Berry Blast smoothie, or a refreshing Red Bull Rush. They also have items to curb your morning appetite – offering various breakfast items, including breakfast bowls, sandwiches, muffins, and more.

The Ellianos Bainbridge location is owned and operated by Mike and Leslie Harrell, Rachael Harrell and Whitney Thomas – a mother of two with deep roots in the Bainbridge community. Thomas grew up in Bainbridge and became a vibrant part of the community. Thomas later moved to Lake City, Florida – Ellianos headquarters location – and quickly fell in love with the coffee brand.

“Once you’ve had Ellianos, you pretty much don’t want anything else,” said Thomas. “I coached soccer in Lake City, and I remember looking around the soccer field one Saturday morning, and almost every person was carrying an Ellianos cup.”

Thomas and her family moved back to their hometown of Bainbridge and decided to bring their love of Ellianos Coffee with them.

“When I found out I was moving back to Bainbridge, I knew they needed a quick place for coffee,” Thomas said. “The product is really good and so is the brand; it holds a good standard for only 19 stores, people know what it is and are excited.”

Thomas says she has gotten tremendous positive feedback and excitement from the community, stating, “I get dozens of messages a day from people asking when we’re opening. Since we’ve started training, we’ve had cars already lining up to get their coffee. The community is so eager and excited, and so are we!”

Thomas admits she is nervous.

“It’s like Christmas Eve, but with anxiety attached to it,” she joked.

However, she knows she has a great core staff, being led by manager Patrick Reels. She invites everyone to join them on opening morning.