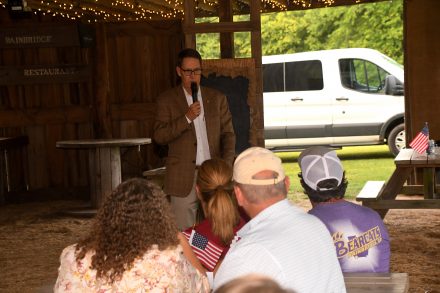 The three each spoke about various topics, with Senator Burke going first, talking about the new election bill.

“One thing I’ve learned since I’ve been in the legislature is that, end products that we produce at the end of a session are always better for the discussion, and input, and committee process,” Burke said. “If you can imagine a 30-page bill, we have people who argue over every word in that 30-page bill, and that means, at the end, there’s less likelihood that we screwed up.”

He provided attendees with a paper made by an attorney that summarized the new election law.

“I think that election bill goes a long way to bring back appropriate oversight of the election process, but until we have an election or two, there’s still going to be shortcomings that we’re going to have to find, because no bill is perfect,” he said.

She followed up on points Dr. Burke made.

“I will tell you, as we look at legislation, Dean was right on it. Every piece of legislation gets really thoroughly washed and scrubbed before it comes out.” She then went on to discuss both Georgia’s reaction to the pandemic, as well as the previously mentioned election bill. “I’m vice chair of appropriations in the House for healthcare. And it is a tremendous, really tremendous thing to look at. Those needing have Medicaid, and they’re very much in need. And that’s a growing part of our population, again, because of the pandemic. On the same token, we have state employees and teachers that we needed to protect too, and those dollars go out very quickly.”

According to Taylor, that final amount spent is not available yet. She also cited Georgia’s current tax revenue as up 68% over last year.

“We were very fortunate to have been a state that opened up much quicker,” she said.

One point of contention she mentioned was the infamous “water bottle ban,” as some have called it.
“You can go get a cup of water, you can bring a bottle of water, or you can distribute water, if you are 150 feet away from the precinct,” she said.

She described how her husband, her “sign man,” measures the exact distance from the precinct for her. “I would never presume to go inside 150 feet.” She also mentioned two Georgia politicians who, in recent years, handed out pizza and snacks to voters, with both now having ethics complaints filed against them.

After Taylor finished, Rep. Joe Campbell spoke last, giving an introduction of himself, his family and life, and how he came to be involved in politics.

“In my retirement, I started, just like ya’ll are, got started getting involved in the Republican Party at the local level. So that kind of got me started…. But the real reason I did this, it looked like to me, and you gotta remember this was three years ago when all this started happening… it looked like to me that our way of life down here was being attacked.” He continued, “I just felt like ‘The opportunity’s there, the door’s open, and I need to get off the sideline, get on there and see if I can make something happen.”

The next Decatur Republicans meeting will be at 6:30 PM, August 10, at Boyd’s Barbeque. The agenda will focus on the new election requirements, and finding and training poll watchers and poll workers.