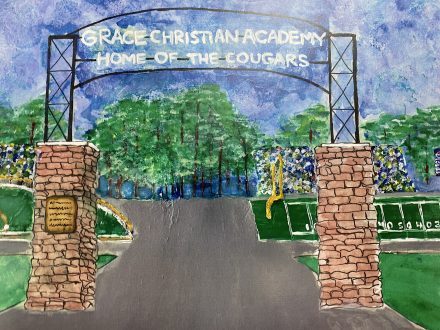 A watercolor was created of what the eventual GCA Athletic Complex will look like. It is set to break ground soon.

A longtime dream of Grace Christian Academy founders, parents and students is finally coming to fruition; the school will be breaking ground on an athletic complex later this summer.

Mardi McRae, Director of Development, said the dream of having an athletic complex has been around since she started her job approximately 20 years ago.

“When Grace first started in 1994, we had no gym,” she said. “So, we had to play our basketball and volleyball games at other locations. Now, we have a gym, but we have to play our other sports on city fields.”

“Then, we really needed our own facility,” McRae emphasized. “When you have sports team, your gate and concessions usually foots the bill for that team, but right now our basketball and volleyball are footing the bill for all of our teams.”

McRae knew the school was in need of an additional sports to underwrite the programs. The Board then gave McRae the license to begin raising funds for an athletic complex.

She put together a committee, consisting of herself, Athletic Director Lance Godwin and some parents on the Board to help raise funds and attention about what the school’s plans were.

“This was something, of course, the Board had always hoped for and prayed for as well,” she said.

The committee began their fundraising in March and within eight weeks had raised approximately $1 million.

However, the committee had their goal set at $1.2 million, so they rolled out the donor form to GCA families.

“Until then, we had kind of kept it on the down low because we didn’t want them to feel obligated to raise all this money,” she said. “We wanted to be further down the road.”

Since rolling it out to families, McRae said they have currently raised $1,000,050 with additional pledges coming in daily.

The new athletic complex will be located right past the Decatur County Humane Society, where the school owns 35 acres of property.

“It backs right up to the Bill Reynolds Sports Park,” she said.

McRae said the support backing the new complex has blown her away.

“In eight weeks we raised $1 million because families are so on board,” she said. “They have jumped in with both feet because they love what the school has done for their children.”

McRae said the engineering for both the facility and the structures that will be on the facility have all been donated, along with the electrical work.

“It has blown me away with how families have responded to our ask,” she said. “It has been incredible and so encouraging the way people have opened their hearts and their wallets.”

The excitement surrounding the new complex has been indicated in all areas, as McRae said their K3-9th grade classes all currently have a waiting list and they’ve had a growth in registration for fall sports.

“I’ve never seen an influx in enrollment like this in all my 20 years,” McRae said. “Our ninth grade has been closed since the end of March.”

McRae said the school would love to expand their class sizes, however they are out of space.

The hope is that with this athletic complex the school can also add additional office space out there, freeing up room for more classrooms.

“The eventual goal is to hopefully put the high school out there so they are there next to the field and the elementary school can use the current space on Alice Street,” she said. “Right now, there’s not another desk to put a body in.”

With the Board already soliciting bids, McRae said the plan is to hopefully break ground on the complex this July. Her hope is to be able to see her youngest daughter play soccer on it by spring of next year, allowing the senior class to be the first to ever use it.

McRae is overjoyed with the endless possibilities of growth for GCA and asks anyone interested in the facility to contact her at mmcrae@gcacougars.org.