An icon of Education 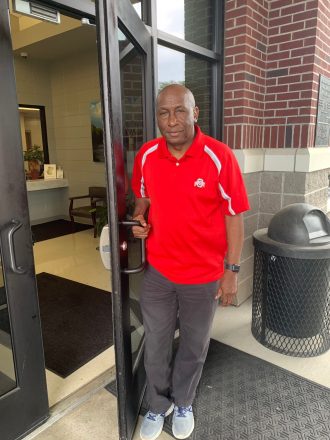 Dr. Clark, attired in an Ohio State shirt in honor of his daughter, stands at the door of Jones Wheat Elementary, where he has welcomed each new student each school year.

After 46 years in education, Dr. Larry Clark is retiring from his position as Principal of Jones Wheat Elementary School, a role he has held since 1990. But that does not mean he is through with the teaching and learning experience.

He plans to stay on at the school, working a couple of days a week, helping the transition process, as Kaycee Wade assumes the role of principal.

Clark’s educational background includes a Bachelor of Science from Morehouse College in Atlanta, where he majored in health and physical education. From there he attended Florida A&M University, receiving a Master of Education with majors in middle grades, early childhood and health and physical education. A Master of Education from Troy State University prepared him for leadership, along with an Educational Specialist degree from Nova Southeastern University, all leading to a Doctorate in Educational Leadership from Nova.

He began his teaching career as a fourth and fifth grade classroom teacher at Lillian E. Williams Elementary School in Attapulgus in 1975. In 1979 he went to Hutto Junior High School as an eighth grade social studies teacher and coaching in varsity football and track. While at Hutto he was named Teacher of the Year.

His interest and schooling in athletics has not gone unnoticed, as he was the BHS head track coach for 30 years and an assistant football coach during the time BHS won the state championship for football in 1982. The track state championship was in 2010.

He still keeps up with all school sports and with former students who have received athletic college scholarships and gone on to graduate from college and be successful in their lives. “It is the highlight of my life,” he says.

His goal is and always has been learning all about each student who comes across his path. It begins with opening day each fall when he stands at the door to the school and greets each child by name. He also needs to research what will make each child be successful.

“I try to make a difference in the lives of others.” To be sure he researches each youth and their particular skills. His special piece of advice is always, “Find a job you like and you will never work another day of your life.”

“All children want to be nurtured,” he insists, adding, “Everybody has a special gift – a niche. They just need help and encouragement to find it.”

He recalls one particular young boy he met on the first years of his teaching in 1978. The small lad began school with his tiny feet tied into adult shoes that were way too large for him. Clark knew the boy came from a severely impoverished home. He went out and bought the boy a complete new wardrobe including shoes that fit, a book bag, and any other supplies he might need for school. “I planted a seed in his life,” explains Clark, who then related that just three weeks ago that same boy, now a grown man with a successful career came back to Bainbridge and came to see Dr. Clark at the school, where they relived the early years and shed some tears.

The man then returned to his home in N.C. and sent four huge boxes of clothing, shoes and school supplies, which Clark says will be allocated to those in need when school begins in the fall. The man is not only a successful businessman but a minister in his church.

Another example of the loving care Clark has provided for a child was this year. The student was a member of the gifted class, and when the class was scheduled to go on a field trip to Jekyll Island, the boy came to Clark and tearfully told him his mother had told him she could not afford to send him with the rest of the class. Clark told him, “You are gifted and going along with the rest of the class,” which he did.

He thinks the biggest changes he has seen in education over the years have been in trying to motivate children to work and realize their potential. He sees too much distraction for them. Worse yet, are the societal changes that have come about. “At one time the age of your grand parent was in the 60’s and 70’s, and they set an the example for the children they were often rearing. Now, they may be as young as late 30’s and early 40’s.” Hardly adult enough to handle their own lives, never mind their grandchildren.”

Clark notes that many of his students today are the children of parents he had in school. They know what is expected. Dr. Clark does enforce the rules and students soon learn that. He tells them, “I’m not mean, but I mean business.”

A change he would like to see in the education field is smaller classes, where children can receive the individual support they need to find their niche. He also touts reading as being the backbone of learning. “Parents need to make sure their kids read at least 30 minutes each day. 180 days of school is not enough to meet today’s needs— where knowledge changes every day. The ones who spend the most time reading score the highest,” he explains.

Dr. Clark credits his mother Ossie with his zeal for learning. As a teacher and single mother of four children, she always stressed the importance of education in achieving success in life. All four of the siblings became involved in education: Patrick is a coach in the Bainbridge Middle School, Thomas is a media specialist and Patricia teaches sixth grade at Hutto.

Dr. Clark and his wife Shirley have two daughters. Shirmil Clark holds a Doctorate of Pharmacy from The Ohio State University, and is employed at the Kinnerstone Hospital in Atlanta. Shirelle Clark is a nurse practitioner, employed with the Cancer Center in Newnan, Georgia.