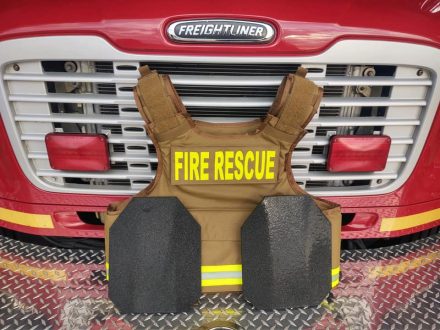 Pictured above are the new ballistic vests offered to DCFR engineers. They were purchased with the help of Woodman of the World.

Decatur County Fire & Rescue recently purchased their first ballistic vest, following a series of scenarios involving the use of firearms.

DCFR Assistant Chief Jamie Earp said DCFR was dispatched to an officer down, referring to the shooting of the late Capt. Justin Bedwell, while there they operated the best they could, helping anyone in need, but when they returned to the station to debrief they questioned if they were ready for that call.

“In the conversation at the debriefing, it got brought up that we were on scene where these shooters were, but did we have anything to protect us,” Earp said.

During the call, Earp said all DCFR engineers had on their “regular” clothes, consisting of a shirt with pants and EMT gear, but no real protection such as Taser or gun.

“We then started talking about the options and ballistic vests came up,” Earp said. “Several people who were on scene then spoke up and said they wished they would’ve had something like that.”

Earp said following that conversation, DCFR stepped back as an organization and questioned if this was something they could make happen for their team and was it monetarily feasible.

“We knew we had to put this equipment on our people,” Earp said.

However, Earp did not want to dictate when personnel had to wear them. He said he wanted to provide the equipment for people they may need at any time.

For instance, he said engineers may not always need fire gloves; they may sometimes need extrication gloves.

“By offering ballistic vests, it’s sort of like offering a second set of gloves,” he said. “It gives them another tool for whatever job they may need to do.”

However, the question was still how could DCFR afford the vests.

That is when Earp received a message from Karen Cooper of Woodman of the World.

According to Earp, Cooper told him that God had laid it on her heart to do something for the fire services and the Woodman of the World would like to help in any way they could.

“She really got the ball rolling,” Engineer Tyler Dalton said.

Earp explained to Cooper that they were in the process of trying to purchase ballistic vests for their men.
Cooper was intrigued and asked questions about what exactly ballistic vests were. Earp said they walked her through bulletproof protection and explained how they found these particular vests.

Cooper then asked for information to provide to the Woodman of the World. She then presented the information to the organization, who jumped on the idea.

Cooper asked Earp if they could purchase their first ballistic vest, and purchase additional vests each time the DCFR purchases one.

Earp was ecstatic and said one of his goals was to try and get the vests 100 percent grant funded.
“We want ballistic vests to be on all of our front line responders,” Earp said.

The front line consists of approximately six engineers, with hopes of getting them for everyone in the future.

The vests DCFR chose offer both pistol protection and rifle plating. Additionally, they weigh in the neighborhood of 60 pounds.

Earp said it is important that each engineer knows how to properly don a ballistic vest.

“We want to make sure everyone knows how to put on the vest and how to put it on quickly, along with know its limitations,” Earp said. “We want them to understand that this doesn’t make them bulletproof.”

Earp’s hope is that with these vests his co-workers can feel safe and make it home to their families.

“It really is a universal piece of equipment. The response inter departmentally has been extremely grateful.

They are so thankful they have this protection for them, because you never know what tomorrow will bring,” Earp finished. 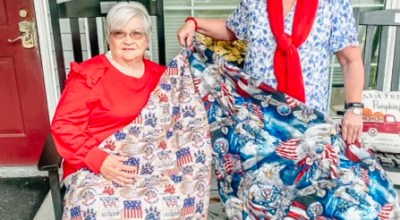