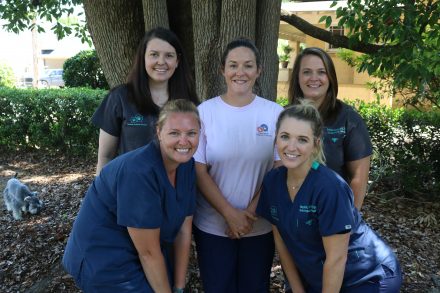 The founders of Milestone Pediatrics have been planning on hosting a day camp since the beginning. Jordan Speller and Kristen Palmer, along with their staff, will begin hosting it in June.

As the school year closes and summer vacation kicks in to full swing, various summer camps are offered to local kids. One new day-camp that will be offered next month is Camp Milestones, offered by Kristen Palmer and Jordan Speller with Milestones Pediatric Therapy, aimed at serving children with disabilities.

Palmer gave the Post-Searchlight a preview of what to expect at the camp.

This camp has been in planning from the start, although not intended this soon.

“My business partner and I started this clinic a couple of years ago, late 2018, early 2019. And it’s kind of something that we always talked about, that seemed like a good idea, years and years from now.”

“I just happened to meet the owners of Spring Hill Tree Farm, like in a random social, ‘knew a friend-of-a-friend’ kind of thing, and the opportunity just presented itself.”

Each week is intended to have a different theme, with planned themes including space, super heroes, pirates, and an Olympic/patriotic theme in the week before the Fourth of July.

While the camp has officially begun, Palmer still has plans for the future.

“We have lots of ideas of what we would like for it one day to be, but right now we felt like this was a good starting, do something small, something local, and see how the interest was. See what the parents’ feedback is, and what kind of direction, basically the demand of the population leads.”

“I think personally, and as a representation of this clinic, we are just beyond excited,” she said, “and we feel super blessed to be able to host this kind of thing… I just know that it’s going to be a blessing to the volunteers, and to the campers for sure.”

The camp will open June 7, and go from Mondays to Thursdays. At the moment, the admissions are currently at capacity, though that is subject to change. For more information, contact Milestone Pediatric Therapy at 229-515-8999.