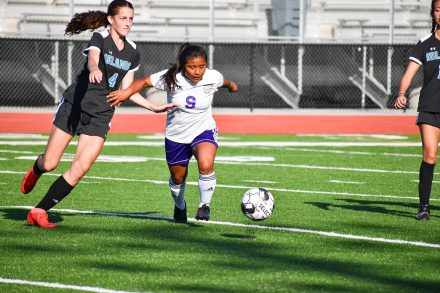 Evelyn Mach pushes away Islands Sharks as she takes the ball down the field during the second game in the state playoffs.

Bainbridge’s High School 2021 varsity soccer seasons came to an end in the second round of the GHSA state playoffs, as the girls team came up on the short end of a 2-0 score in Savannah, while the boys were defeated 5-0 in Lagrange.

In the girls contest the Lady cats traveled to Savannah and the host Islands High School Sharks were able to score two first half goals that proved to be the difference in a scrappy spirited contest.

Islands scored their first goal, seven minutes into the contest, as midfielder Hannah Summerall scored off a deflected shot from 20 yards out.

An islands forward had gotten free on a breakaway, but Bainbridge Goalkeeper Ashanta Peterson came up and pressured the player leading to a shot, just inside the LadyCat penalty are, that was deflected away by Peterson, but right to an onrushing Summerall who shot quickly to the open net for the initial goal.

Bainbridge came back with several first half near misses,,by Junior Forward Nathaly Rodrigues and midfielder Evelyn Mach but neither could get it in the goal.

The Lady Sharks scored their second goal late in the first half with just under seven minutes remaining, as Forward Jade Cintron scored from 17 yards away, to give Islands a 2-0 halftime lead.

Despite multiple shots on goal in the second half, neither side could get another goal to cross the line, as the defense stood strong, with the goalkeepers making numerous saves.

Bainbridge goalkeeper Ashanta Peterson had six saves in the contest.

“As a coaching staff we have been proud of the girls effort all season and getting to see them push through to the next level.” Hopefully their accomplishments can inspire future lady cats to even greater heights.”
“We shall miss our senior competitors next season as they each did a great job in their team roles”. Those donning the purple and gold ,on the varsity soccer gridiron for the last time are, Defender Emma Briggs, Midfielders Jennifer Pascual, Britney Lopez, Sarah Victor, and goalkeepers Ashata Peterson and Keilaya Pryor. Also those who also competed for us during the season were Olevia Diaz, Isabelle Marquez, and Brook Worsley who will also be missed.” 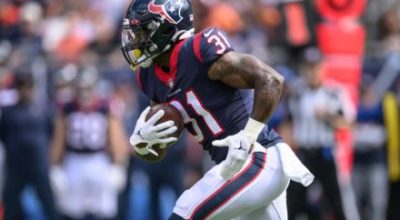