A Bittersweet Win: Otha Backey named Teacher of the Year, following death of her son 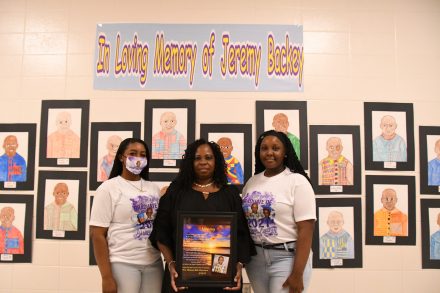 Left to right, Alexis Hightower, Otha Backey and Maya Backey stand in front of portraits of Jeremy Backey at Jones Wheat Elementary. Otha holds in her hands a portrait of Jeremy, along with a poem written by his former teacher.

Otha Backey of Jones-Wheat Elementary was recently named Teacher of the Year for 2021-2022. While this is a major accomplishment to be celebrated, it comes at a bittersweet time for Backey, whose son, Jeremy would have graduated this year.

Backey’s son passed away at 9-years-old in Atlanta from a neuroblastoma.

In order to commemorate her son, Backey started an award that she gives to a student usually in the first grade, because that was the grade her son first started at JWE. However, at times she was unable to choose a student, so she would open it up to all grades.

“Now, anybody can receive Jeremy’s award,” she said. “Last year, because of COVID-19 we were unable to do school awards, so I gave it to a child from my church and Cloud Kirbo.”

Jeremy’s memory is not only found in awards, but this year the JWE art class did a portrait rendering of him.

Backey explained that during Black History Month, the art teacher Mrs. Cosby decided to have the fourth graders complete a portrait and didn’t reveal who it was on the last day.

“It was so special to me,” Backey said. “Some of the students who drew these portraits were in my class in kindergarten. It was amazing; I was speechless.”

Backey said the family at JWE has blown her away several times and certainly knows how to surprise her, especially when it came to winning Teacher of the Year.

“I am so honored for my colleagues to have chosen me,” Backey said. “This is my third time I have won and I was shocked, but it is bittersweet. Not only was this the year Jeremy would have graduated, but my husband passed away this year as well.”

Backey said her husband was having medical issues breathing, but it was not COVID-19 related.

“When I took him to the hospital, I was not expecting him to not come back out of there,” she said.

“Cleveland (Backey’s husband) and Jeremy were so much alike,” she said. “They never complained; they always remained positive. I called Jeremy my little encourager.”

Backey’s little encourager and faith has helped her make it through some tough times in the classroom this year.

“The only way I can sum it up is to give it all to God; He strengthens me,” she said.

Backey admitted sometimes it is tough to get to work, and sometimes she does have to take the long route, because she was not a morning person, and prior to her husband’s passing he would be the one to get her coffee and make sure she was out the door on time.

But, once Backey steps foot in the classroom her students help her in a way the students can never know.

She said she has pictures of her husband and Jeremy in her classroom and they talk about them and the kids ask questions. They also recite a motivational poem every day that basically teaches them some days are good and some days are bad.

The students and faculty are not the only ones who take note of Backey’s strength.

Backey’s niece and daughter were present.

“I’m very proud of you and all of your accomplishments,” said niece Alexis Hightower. “I see your strength and so does the whole family.”

Backey’s daughter, Maya then told her mother how proud she was of her.

Backey explained that Maya was a true daddy’s girl and looked at her father as the perfect role model.

Backey said she believes her husband is also proud of her and looking down saying “I knew you could do it,” as he was always her biggest supporter.