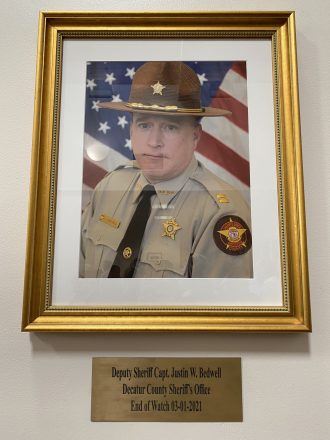 Captain Justin Williams Bedwell’s portrait will now hang in the lobby of the Decatur County Sheriff’s Office in his honor.

Officers and members of the community huddled together at the Decatur County Sheriff’s Office on Wednesday for a ceremony to honor the late Captain Justin Bedwell during National Police Week. During the ceremony, Sheriff Wiley Griffin unveiled Bedwell’s portrait that will now hang in the Sheriff’s Office Lobby in his honor.

Griffin opened the ceremony by thanking everyone for attending and reminding them of the ultimate sacrifice that is often given in the line of duty.

Major Wendell Cofer followed Thomas’ Invocation with a remembrance of his friend, Justin and all other fallen officers.

“When deciding on this memorial, we decided we wanted everyone to see the pictures and see the price that had been paid,” Cofer said. “However, our fear was that someone might forget the families, so today I am here to honor them.”

Cofer acknowledged that officers are often told they pay the ultimate price, but he disagrees. Cofer said he believes families pay an even higher price, because as Christians, individuals know they are going somewhere far better than Earth. However, Cofer said families don’t get to make that trip yet; they are forced to stay and wonder how they will pay the bills, how will they raise a child and how they will juggle everything as a single parent.

“These six officers we remember here today probably started off their day as usual, drinking their coffee, but in law enforcement there is no usual day,” Cofer said. “Just a matter of weeks ago, officers went to conduct a welfare check on behalf of the family and were shot at with nine bullets. Things can change in an instant.”

Cofer said these tragic deaths remind him daily to kiss the ones he loves and he hopes that everyone will do so as well.

“You’re doing a terrible disservice to your family if you don’t walk in the bedroom and kiss that sleeping child or call your wife and tell them you love them today; it’s as important as that next call you may receive,” Cofer said.

Griffin thanked Cofer for his words and then spoke on one of Decatur County’s own who was severely injured in a call for service, but overcame it to serve in a different way.

Now known as one of their Chaplains, Thomas was a Bainbridge Police Officer, when he was injured in 1972.

Thomas was assisting two nurses, Martha Jones and Linda Snodgrass, when he was hit.

Jones’ vehicle had stalled on U.S. Hwy 84 and Snodgrass had stopped to aid, when Thomas arrived to render assistance.

Both were given emergency treatment at the hospital, before being transferred to Phoebe Putney.

Unfortunately, Thomas lost his leg and Snodgrass lost her life. However, this incident did not deter Thomas, as he entered the ministry and decided to serve the Lord by inspiring officers with an uplifting message.

“I believe there is a special place in the heart of God for those who pay the ultimate price and serve others,” he said.

Upon conclusion of his message, Bainbridge JROTC Sgt. Scott Morehouse announced they had created a new award to honor Bedwell, known as the Captain Justin Bedwell Memorial Distinguished Valor Award.

Morehouse then presented the award to two cadets, who helped the citizens of Decatur County.

Griffin then presented Bedwell’s wife with an award he received posthumously.

Griffin recounted the events leading up to Bedwell’s death, and told Katherine that her husband’s last words were, “Tell my wife I love her.”

He then presented her and her daughter Maddie with the Medal of Honor Award for Bedwell’s performance of his duties as a Law Enforcement officer.

Griffin hugged Katherine and spoke with her briefly, before asking everyone to stand for the unveiling of Bedwell’s portrait.

As it was unveiled, Griffin asked God to bless Bedwell’s family and gave them one final hug.