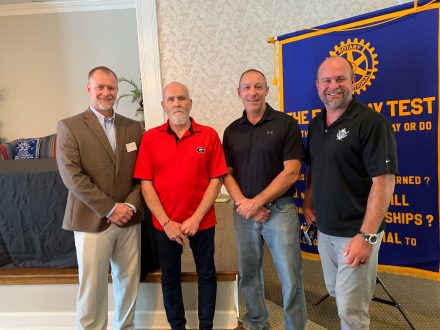 Bainbridge Rotary was honored to host Rotary District Governor, Kirk Driskell, as the program speaker this week—but his topic was not Rotary per se.

Instead he was promoting Vision Warriors, or waron.org., an organization described as having declared war on addictions.

He began by stating that he had personally celebrated 26 years of sobriety on April 24, of this year, before crediting God and the people in his life who had helped him go forth to become the man he is today—far from the one he used to be.

He then explained how he has established the first Rotary club based on restoration recovery, with members in Florida, Calif., Texas, Tenn. and other states.

He described how one of the missions of the members was passing out Narcan on the streets of Philadelphia, thus saving lives.

Narcan is a nasal spray prescription medicine used for the treatment of a known or suspected opioid overdose emergency.

Driskell stressed the point that although Vision Warriors is Christ centered, there is also support from Atlanta Jewish Ministries. Basically it is a matter of surrendering and admitting you need help.

Driskell then introduced two men who had accompanied him from the transitional treatment home in northern Georgia.

“Kim” was the first to speak, admitting he was on his second residence at the home, having moved out after earlier treatment. He then had a relapse that nearly cost him his life. He was in Florida and got into drugs that caused him to pass out on the street. “I was unresponsive when placed on the stretcher. I was dead actually.” he explained.

“I didn’t use the tools there the first time I was in residence. I didn’t get the roots down. This time round I am doing better. I needed someone to talk to and to be accountable.”

The second speaker was “Todd” He said he had never sought rehab from his alcoholism, but he was down and out and needed a place to go. After my first hour at WARON I knew it was what I needed. It is faith based and my faith was gone – lost over the last ten years.”

He needed a place to get safe and be accountable. He said there is no time limit on the stay and he has enjoyed sobriety for 18 months now. He reported on two persons who have come in the last two weeks. One already has a car and a job.

“It is a place to get comfortable and restore peace of mind.”

Driskell then took the floor saying the place is not scripted other than three or four rules. “Every man is there because he wants to be.”

There are several WARON recovery houses in North Georgia, according to Driskell, who said they are interested in starting one in South Georgia, acknowledging there is a great need. He said they would be interested in talking with a church in the area willing to take on the Christ-centered non-profit project.

People can help by donating household items, giving financial support, offering a job opportunity to a warrior, or even donate a vehicle.