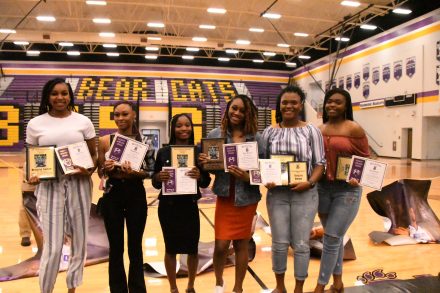 Thursday night, the Bainbridge Basketball Bearcats and Lady Cats were recognized for their accomplishments during the 2020-21 season.

Mrs. Salter opened up the banquet by welcoming everyone and noting the difficulty the team faced this year, due to having to quarantine several times during COVID-19. She explained that basketball takes hard work and dedication, and despite the circumstances this year, every player put forth those attributes even when unsure it would pay off. She then turned over the microphone to Coach Jeff Page.

Page first recognized that it was a tough year for basketball.

“From my standpoint, the boys handled it very well and would always pick it up right where we left off,” Page said. “Parents, you raised some great young men.”

Page applauded the seniors for their work ethic, something he believes their parents have instilled in them.

He informed the crowd that all the senior players have jobs that they go to after a long day of practice and school.

Page joked that he hopes they don’t complain as much at work as they do at practice, though.

Page then recognized each player individually, sharing a small anecdote about everyone to the crowd.

AJ Grant was the only freshman on the team this year. Page said Grant is a dual threat on the football field and on the court.

“A lot of times you look back and he was our leading scorer, so I look forward to big things to come from him,” Page said.

Page also recognized KJ Cochran, who was injured this past season, saying the team missed him, but they are looking forward to what he brings in the years to come.

“He played extremely hard; he made a lot of things happen and always had a lot of energy,” Page said.

Dialan Beard was attributed as one of the most improved athletes on the team this past year.

“He made a giant step this year and helped us out and I look forward to seeing what he brings next year.”

“The tallest kid in the school” Demetriss Chappell was then recognized for his hard work before Ashton Parris received his plaque.

Finally, Page presented the seniors and team captains with their awards.

Dylun Worlds was named charge leader and assist leader, along with the team captain.

“As a coach, you always want a point guard who can see exactly what you see and Dylun did just that, I have enjoyed him and I’m going to miss him a lot,” Page said.

“This is 35 years of coaching for me, but he is in the top 5 defensive players for me,” Page told Cooper. “The way he plays, his defense and offense, rubs off on our team.”

“I’ve enjoyed coaching Mark” Page said. “He has come a long way. When he gets on the court he comes alive and has done a great job for us.”

Page then gave the floor to Coach Kelvin Cochran, who recognized all the Lady Cats players.

Cochran began by thanking the Booster Club, the concession stand and all the parents who helped make this season successful.

Cochran pointed out the struggle the team had faced this season, following three separate quarantines and losing their starting point-guard due to an injury for four games. Despite this, the Lady Cats made it to the second round of playoffs, which Cochran was proud of.

Cochran then recognized each player individually.

He began with sophomore Zoe Wells, who had the team’s highest GPA this year before moving on to Elexis Warner.

Cochran said Warner stepped up and was valuable when Angel Peterson was out because of injury, gaining her valuable insight for seasons to come.

He then moved on to junior Courtney Sanders, who he claimed was the biggest cheerleader for her sisters on the court.

Peterson was then called up and awarded charge leader for the season.

“This is the Kobe Bryant of the team,” Cochran said. “She oozes athleticism on the court.”

Kirston Noble was recognized at the best three-point shooter for the year and Honorable Mention All- Region.

Taralyn Brown, who was deemed not afraid of the moment, was named Assist Leader, Steals Leader and Second Team All- Region.

“Other coaches around the region spoke very highly of DD; it’s big what she can do to protect the rim,” Cochran said.

She was also named First Team All- Region.

Ashanta and Register were both most Improved, while Porter won the Coach’s Award.

Cochran said Porter held a special place in his heart as he had known and been working with her since middle school.

Porter then tearfully thanked Cochran for being a father figure in her life and making her the woman and player she is today as the banquet concluded.