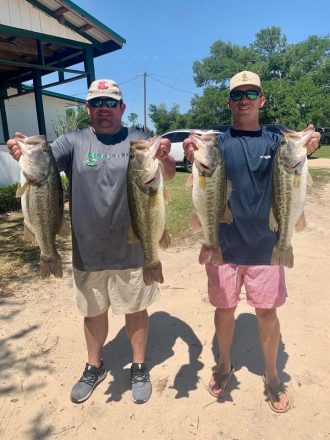 Chandler Ray (left) and Christian Rich (right) hold up four of their large- mouth bass they caught in the weekend tournament.

Chandler Ray and Christian Rich of Bainbridge came in first place in the Reel Money Team Trail fishing tournament this past weekend. Competing against twenty other teams of two, the men caught five large-mouth bass with a combined weight of 23.63 pounds.

This tournament was the first the duo have fished together.

“We thought we’d hop into this one together,” Ray said. “We ended up lucking up and having a good time.”
The two used to be competitors in prior contests.

“We used to fish against each other a lot,” Rich said. “There was a fishing tournament up in North Georgia, at Lake Sinclair. He was in fifth, I was in sixth.” According to Rich, while they weren’t close at the time and hadn’t fished as a team, they exchanged contact information, due to them both being from Bainbridge and traveling the same routes to tournaments.

“I texted him Friday,” Rich continued, “and asked him ‘Hey, you wanna compete in this tournament with me?’ He said ‘Let me check with my wife.’ It ended up being a blast.”

With the tournament hours going from 7:00 AM to 3:00 PM, the pair caught their fish within the first hour, having traveled miles up the Chattahoochee to get away from the Toyota Series fishing tournament.

“The fishing had been kind of tough, but with the tournament at the Bainbridge Boat Basin, the pressure was increased,” Ray said. “So we made a run off from everyone else, and we were lucky to catch them all in the first hour of the morning.”

Three more Reel Money qualifier tournaments will be held on Lake Seminole, with the next one scheduled for June 12, launching from Big Jim’s. The Reel Money championship will be held from October 6-8, at Cooter’s Pond on the Alabama River.