Spritzit makes name for itself in local hand sanitizer industry 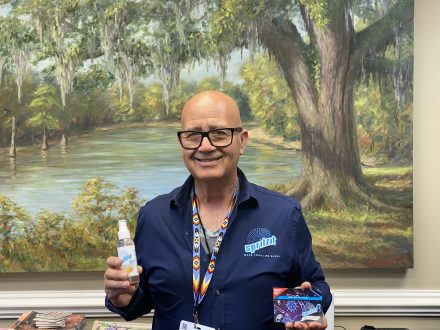 Rick Collett describes himself as a formulator. He said he has been formulating different products for over 40 years, with his first project being 35 years ago, here in Bainbridge.

His first project was with Jamie Bulger of Hunter’s Edge.

Collett said later Bulger and Tim Smith teamed up to produce Georgia Gold. However, when the COVID-19 pandemic hit early in 2020, Bulger and Smith re-purposed their distillery to make hand sanitizer.

While the intentions to mass produce hand sanitizer were good, the sanitizer often came out somewhat sticky and had the scent of old alcohol, Collett said.

That’s when Collett realized he had to do something and created Spritzit Hand Sanitizer.

He said there were three major issues with current sanitizers: it was dry on the skin, it was itchy and the aroma.

As a formulator who had previously formulated cosmetics, Collett knew just the right thickener to put in the sanitizer gel and sprays.

“The distillery probably used the food grade gels, which probably made it sticky, but I’ve been able to alleviate all those problems,” Collett said.

Collett has incorporated Aloe Vera gel into the sanitizer to moisturize the skin.

In addition, he has exceeded the CDC’s recommendation for 62% Ethyl Alcohol and made Spritzit 72 percent.

“Truthfully, all you need is 62%, but we wanted to satisfy people’s concerns,” Collett said.

The difference is in the alcohol Collett said.

“We usually use a 190 proof or 200 proof,” he reiterated. “We use a much purer grade of alcohol that doesn’t have that bad aroma and added an aroma as well.”

Collett said he originally wanted to offer Orange Blossom after meeting a woman one night at dinner, who informed him that her favorite product contained Orange Blossom.

While Collett said he knew he could recreate that scent, he opted to go a different route that paid homage to Georgia.

“We started with peach and key lime; those were the two products,” he said. “But, there are some people who don’t’ care for fruit aromas, so we decided to do Sandalwood.”

Collett said Sandalwood is a favorite for most men, but is popular among women as well.

“We wanted to have a lineup that would appeal to anyone when they walked into our display at stores,” Collett said.

The first location to carry Spritzit was The Bean, where Collett said they sold nine bottles on their first day.

“That was really super encouraging to us,” he said. “At that time, we only had a 4 oz. bottle, but since then we have created a 2 oz. bottle.”

The City has also contacted Collett to put in a touchless Spritzit dispenser in the park.

Spritzit offers both stand up dispensers and wall dispensers that are filled by the gallon.

For those who aren’t interested in purchasing a dispenser, they can purchase a Spritzit gallon for $39 or a 16 oz. in gel only for $7.99.

Collett said the gels or sprays can be purchased at these restaurants and have it added to their bill at the end of the night.

Collett has already Bonnie Blue House and The American join in on this venture.

Collett is pleased with the direction the company is headed and hopes to eventually become the best-selling, best feeling and best smelling sanitizer in the United States.