Politicians speak at the Country Club as part of Chamber luncheon 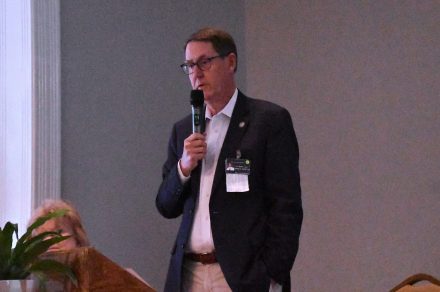 The Bainbridge-Decatur Chamber of Commerce hosted their monthly luncheon at the Bainbridge Country Club on Thursday. Sponsored by NextEra Energy, the event had a busy schedule, with the Star Teachers and Students of both GCA and BHS being honored at the start. Emma Benedict was named Grace’s Star Student, and Mandy Johnson was recognized as the Star Teacher. Joshua Robinson was recognized as the Star Student for BHS, with him selecting Pauncho Hufstetler as his Star Teacher.

“We’ve got one of the largest uninsured populations in Decatur County, in the state. And Georgia has more uninsured people than almost any other state in the country,” Senator Burke said.

Among the new healthcare laws and regulations passed, pharmacies are now allowed to continue providing COVID vaccines, newborn screening programs are to be enhanced, and paid maternal leave for state employees.

“I will say, I got the short straw, I think,” Rep. Taylor said, “I get to talk about the election reform bill we passed.”

She discussed the history of Georgia elections leading up to the 2020 election, before discussing the problems with the election and specific aspects of the bill.

“One of the first goals was to have consistency in the election process,” she said. “Each county has an official designated as the election supervisor or election manager…. They are vested with the responsibility to see appropriate facilities, supplies, trained personnel are available for each election. Every county in the state did not live up to that. I will tell you Decatur County did. There were others that were leaving major gaps in what needs to be done.”

Some of the issues with the 2020 election addressed include non-standardized voting times, a “vote-mobile” driving around Atlanta and soliciting votes, and a representative campaigning at voting lines. The various changes made in the reform law includes extending early voting, making mail-in voting drop boxes a permanent feature instead of temporary, and requiring some form of ID for voting.

After Rep. Taylor concluded, Rep. Campbell spoke, giving a brief recap of his new tenure and the issues that he dealt with. These included things such as redistricting, rural broadband service, and coal ash ponds.

“Instead of going through bills, I want to say thank y’all, it’s an honor to serve this area,” he concluded.

Door prizes were drawn for to conclude the meeting.