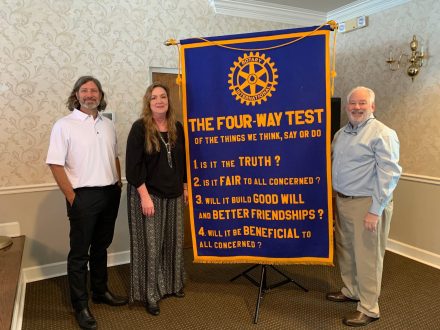 Above, Danimer Scientific COO Michael Smith and Director of Human Resources Ginger Holley were the speakers at Rotary. They were introduced by Dick Ivey.

Danimer Scientific Chief Operating Officer Michael Smith spoke to Rotary this week about how Danimer began and how it has grown with help from local investors.

He explained their product as a biodegradable plastic, saying it is a matter of microbes to which is fed vegetable oil, and after fermenting, the fat is pulled out. “That is the trick,” he explained. “Nobody has done what Danimer has done at that time. A lot have tried and failed, but we stuck it out.”

He promised that a bag or plastic straw made from Danimer product will go away, when it is eaten by the bacteria, and the speed with which it goes away depends on the conditions in which it is disposed. “But even if it ends up in the ocean it does go away under certain conditions.” He praised two of their known customers, Nestle and Pepsi, for wanting to make the world a better place. “When you have some of the largest snack foods companies wanting to make the world a better place, it is very rewarding.”

Smith spoke of the different offices maintained by Danimer. There is a facility in Athens where many of the biochemists work on genetic modifiers. There is the original building in Bainbridge, as well as the old fibers and yarn building, a building in Winchester, Kentucky that was opened in recent years. The offices in Atlanta are basically for the financial affairs.

Now, plans have been announced to build a new plant in the Bainbridge area.

It is to be located on a large property off Pond Town Road. Smith related how the decision of where to grow came down to the Winchester plant or the Bainbridge one.

He said the company had looked at all the factors, cost of gas, electric, etc. and largely dependent on the help from the states involved. He was happy that the economic development people of Decatur County Georgia and the State of Georgia came through with the best offer.

Smith said the new building would be a state of the art facility—something Bainbridge can be proud of. He stressed the need for the schools in the area to rally round and help prepare students for future employment.

Smith introduced Ginger Holley, Director of Human Resources, who described some of the job opportunities Danimer has to offer. Right now, the Bainbridge employment is at 100, with a total company employment from all plants at 215.

Holley said the company is in need of about 30 employees currently, with up to 400 planned for the future when all the expansion is completed.

She described some of the jobs that will be available. Following the groundbreaking, which is planned for early next year – 2022, there will be a need for construction workers, an operation plant manager, coordinators for operation, processors, entry level operators, maintenance and mechanics, etc. There will also be labs at the new facility and a need for those trained in microbiology.

Holley said it will be a good opportunity for young people to get a good start in life, with good salary and benefits.

Fan donation heats up to give some Summer relief