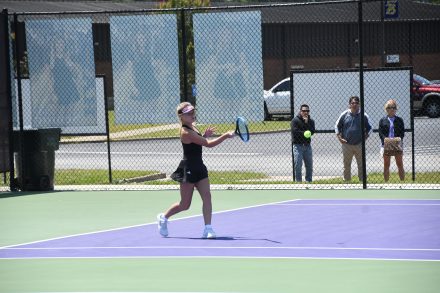 Riley Palmer returns a volley from her opponent during the second round of State competition.

The Lady Cats and Bearcats tennis team took on tough competition from Macon last Monday for the first round of state playoffs.

The Lady Cats faced Howard, while the Bearcats competed against Westside Macon.

The Lady Cats had a full sweep, winning all five matches.

Number two doubles Brooklyn Wade and Piper Loeffler then won their match 6-0, 6-0, not allowing their opponent to score a single point.

Number two singles Rylan Bland finished her match 6-1, 6-1 before number one singles Riley Palmer completed the day with a win of her own.

The Bearcats then took to the court, where number three singles, Hayden Martin was noticeably absent.

Martin had broken his foot the day prior, so alternate Joseph Marshall stepped up to the challenge.

The team breezed through the first round, everyone winning 6-0, 6-1, except for number two doubles, who didn’t give up a single point, and headed into the second round, where they fell short.

Number two doubles Lucas Reynolds and Aiden Tabb won their match, while their teammates worked hard to pull out a win.

According to Head Coach Amy Thomas, Marshall had a very close match, unfortunately the day just didn’t end in their favor.

“I’m very proud of them,” she said. “I thought the boys had a great season. We had some players with not much experience who really stepped up to the plate. Another day we might could have beat that team, it just wasn’t in the cards today.”

Assistant coach Xavier Bell was also proud of the Bearcats.

“We had a great season,” he said. “I saw a lot of growth in everybody from this last year’s brief season to this season.”

This was the first group of seniors Bell got to see through all four years and said he was very proud of the leaders they grew to be.

“I will really miss the seniors, but I wish them well in the next chapter of their life,” he finished.

While it wasn’t in the cards for the Bearcats, the Lady Cats brought the heat to the court against their competition Shaw.

“Shaw was stronger than most of the teams we’ve seen so far,” Thomas said. “We were very proud to win all courts.”

This win advanced the Lady Cats to the Elite 8, where they will now travel to Carrolton and play Central.

“It will likely be the toughest match we play all season,” Thomas said.

Despite the tough competition, Thomas is looking forward to seeing the players peak in their performance.

She said players never want to peak too early in the season, but now they are beginning to peak at just the right time.