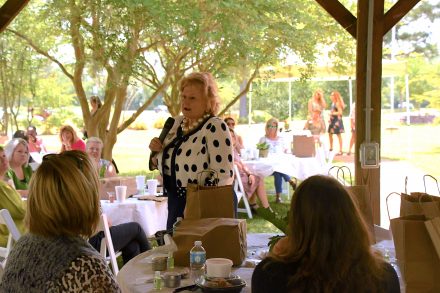 First National Bank held their fourth annual women’s luncheon on Wednesday. A crowd of 147 women gathered at the Boat Basin for lunch and to listen to speakers, with the main speaker being Katherine Bedwell.

“My story is really not that much different than yours,” she said, recounting how she ended up in Bainbridge. “We all have dreams, we all have goals, we all have trials and we have triumphs. Sometimes we have to swing at a curve ball, but sometimes life just simply gets in the way… One of those curve balls came in the form of a bald-headed deputy from Decatur County Sheriff’s office,” she said tearfully. “I really wasn’t interested in getting married again, and especially not to a first responder. And if you knew Justin, you knew how extra he was… but all I can say is he truly hit it out of the park, and I fell in love, realizing that being Maddie’s mom, Justin’s wife, and a teacher, is exactly where God wanted me to be in Bainbridge, Georgia.”

After Bedwell finished her speech, Lauren Minor gave a brief speech on how the pandemic had affected women in the workforce, before allowing the women to discuss various questions she prompted among themselves.

“I’m confident that with this group of 140 ladies we have a lot of wisdom and encouragement to share on how we got through the last year,” she said.

Among the women present at the luncheon was Representative Darlene Taylor, who spoke about how her work had been impacted.

“The first thing I had to do, I’m a working woman like you are, I had to bring a desk home, my computer, I had a little laptop, but that doesn’t get it when you need to work. So I set up an office in my living room, and it’s still there… But for the state, and the people of this state have come together like nothing I ever expected.”

Due to the pandemic, last year’s luncheon was forced to be virtual, and First National only had three weeks to plan this year’s, for the same reason. SIO’s provided the food, while Isaac’s Bakery provided the cookies. Lorenda Smith thanked the various groups that made the luncheon possible this year.

“I especially want to thank the city, because they made sure that area was clean for us, they brought the trash cans. And then the Chamber… the Chamber just picks up and does a lot for us. They send out the notices, they collect the money… And then our team here. You know, these women, we buy flowers, we wrap baskets, we stuff cookies. We get the PA system, the tents, the chairs… and each year, the men in the bank, for that period of time, actually run the bank. It’s kind of funny, but they really want all the women to attend.”

Smith thanked all those in attendance at the event, and hopes for next year’s to be even larger.