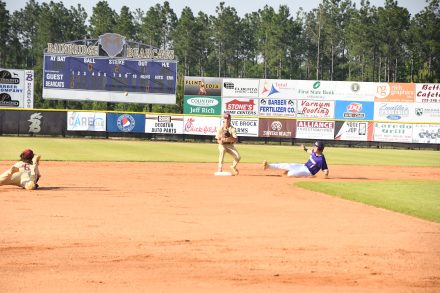 Quayde Hawkins slides into second after Liberty County’s shortstop trips while trying to throw the ball to their second baseman.

After winning a region championship last week, the Bearcat baseball team took to the Bearcat Diamond on Thursday night for their final regular season game and Senior night against Liberty County, where the Bearcats won 9-5.

The game was a special one for the seniors, who have worked so hard for this moment.

According to head coach Donnie Coxwell, it hasn’t really sunk in to the team that they are Region Champions yet.

“It’s humbling to think we did it,” he said. “Those boys have worked their tails off for two years after last year it was all taken from them.”

This group of seniors, though has been working since they were youngsters for this moment.

Eight out of the nine seniors brought home the GRPA Midget Boys Major State Champion trophy for baseball in 2015, making them the first in Bainbridge history to do so.

Thursday night was just another feather to add to their cap.

Liberty County started out strong in the first inning, scoring the first run of the game, but the Bearcats made up for it in the bottom of the first, scoring two runs.

Senior Quayde Hawkins was first in the lineup, where he was walked. Nolan Barr then stepped up to the plate, singling.

Colton Harrell also singled, but allowed Hawkins and Barr to score on an error by Liberty County’s pitcher.

The Bearcats continued to drive in runs in the bottom of the second.

The second inning began with an immediate two up, two down. Senior Jase Godwin was then walked, before Michael Conder singled.

The bottom of the third saw the Bearcats score two more runs.

Senior Conner Poitevint was able to reach on a dropped third strike. Pitcher Dewey Brock then singled and courtesy runner Bo Smith stepped in for him.

Hawkins stepped up to bat and hit a fielder’s choice, scoring Smith.

Neither team saw any action again until the bottom of the fifth, when the Bearcats scored their final runs of the evening.

Brock began the inning by being walked, where Smith stepped in for him again. Conder then singled, along with Hawkins, scoring Smith.

Finally, Will Beckham stepped up to the plate and singled, scoring the final run and bringing home Hawkins.

Liberty County scored four runs in the top of the seventh, hoping for a comeback, but falling short.

Brock earned the win for the Bearcats. He allowed four hits and one run over six innings, striking out seven and walking one.

While this game was monumental for the seniors; it was also a special game for Coxwell.

Joe Ferolito, who umpired Coxwell’s games until 1998, came up to watch him coach.

“He had a huge impact in my life and this is the first time he’s even seen me coach up here,” Coxwell said.

Coxwell and Ferolito exchanged hugs as Ferolito congratulated him on his season.

The Bearcats are now expected to play Spalding in the first round of state playoffs on Wednesday in a doubleheader.

“It’s the first round; anything can happen, but I like our chances,” Coxwell said.

Coxwell said he, nor his assistant coaches know much about Spalding, but said anybody who gets to playoffs is s a good team and strong competition.

The doubleheader will begin at 4 p.m. and the cost is $10. In the event of a split game, the teams will face off again on Thursday at a time to be announced.