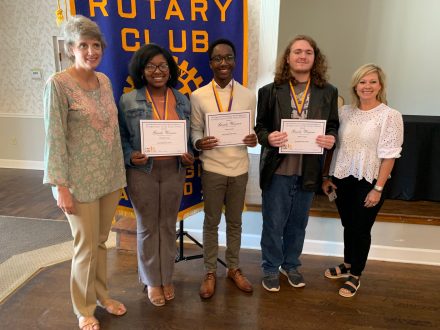 Former BHS Principal Tommie Howell introduced the program at Tuesday’s Rotary program. As a liaison between the Laws of Life Essay state contests and the local Rotary club, he actually brought the program to Bainbridge High School 14 years ago.

English Department Chair, Heidi Chambers, then announced the students who won locally for their grade level, as well as the state winner, Corbin Austin, who won the title over 25,000 applicants.

First to speak was the 10th grade winner Christina Longs, whose maxim was “Our greatest glory is not but in never falling but in the rising every time we fall.” (Confucius), and her title was “Do Not stop for Anything”.

Christina told the story of how she was diagnosed with an extremely rare autoimmune disease called polymyositis at age of seven. It is an inflammation of the muscles causing an inability to walk. At the time they had no idea what was happening, but every time she tried to stand up she fell. The falls continued with the result that she landed in the hospital and she was feeling helpless and hopeless. “I stopped caring,” she said. Afterward, she saw a drawing of a horse with a little girl beside it that had been sent to her by a classmate.

“I realized it was me and after that I was determined to walk.” After receiving a lot of help in walking from family members she grew stronger and then was running. Her mother told her that as she had carried her into the hospital she had received a vision of Christina walking out of the hospital. “That is exactly what I did….I am the walking miracle.

An equally amazing story was told by Gabe Turnage, 11th grade winner. His maxim was, “Some beautiful paths can’t be discovered without getting lost,” attributed to Erol Ozan. His character trait is patience, and his title, “The Summit on the Horizon.”

He told the story of how he had found his own path after stressing over what he would do. When he first began looking for jobs, all he saw were jobs that made money. The more he looked at potential careers, the more each job seemed the same. Then he saw a news article about Japan having a shortage of programmers and that is when he saw his calling. He began working on the computer to learn how to become a programmer, and was so absorbed that he spent an entire week absorbing everything he could about the language of programing. But, even more, to be a programmer in Japan he actually needed to know Japanese, a very difficult language to learn. It has been an uphill battle to learn Japanese, but he is now beginning to see some progress. It has been a year of struggle, but he says he can now understand some words and phrases. He knows it will be years before he is conversational in Japanese, but he is determined and now clearly sees the path before him.

The third and final speaker of the day was Corbin Austin, whose essay, The Dog, the Old Lady and the Boy won first place in the state.

He read a very touching story of how in the spring of his 10th grade his teacher asked if he would be interested in walking her grandmother’s dog, as she was unable to do so due to increasing age and disability. He happily agreed to do so, although he said he knew nothing about dogs. After his first meeting with the lady and her dog he had the impression he would just be helping out a sweet elderly lady by walking her dog.

“But over the course of a year and a half, I would come to find that they would be my daily dose of joy.”

He and Hercules, the dog, walked the neighborhood every weekday, and he says he got someone to unpack his innermost thoughts to while getting some exercise. He describes it as a win-win! Also, the old woman never ceased to put a smile on his face.

He knew she was a little forgetful, but that only added to her charm. He insisted that she not pay him, but she insisted, saying he was the most special boy in the world. “Those words coming from her were payment enough and combined with the excitement she would get from seeing me walk up the driveway every afternoon made me feel like the richest man in the world.”

As he saw the lady become more forgetful, Hercules also began changing. He did not want to stray far from his home and looked longingly at the woman. She began overpaying Corbin, and when he mentioned to his teacher that he didn’t feel right accepting the money, because he enjoyed being there and helping her. His teacher told him that right now more than ever her grandmother needed a purpose and her feeling like she is helping him was her purpose. At that moment he realized that her happiness was contagious and that true happiness comes from making others happy. So he continued as if nothing had changed. “Every day that I saw her, she still had her smile and I mine, and I felt like the richest boy in the world.

The 9th grade winner, Brooklyn Wade was unable to be present to speak to Rotary, but her essay was titled, “Learning to be Myself,” and was all about her love for reading.

Decatur County School Superintendent Tim Cochran then closed the session by praising the students with the thought that some pretty amazing people walk the halls of our schools.