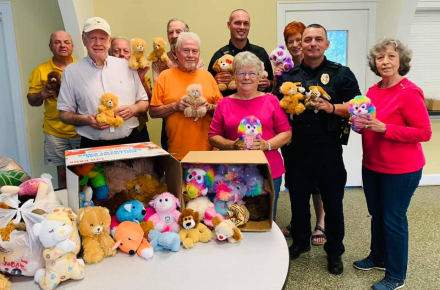 This past Tuesday, the Decatur Lion’s Club donated nearly 200 stuffed animals to Bainbridge Public Safety and the Decatur County Sheriff’s Department. This is part of their program “Buford’s Bears,” named in honor of the late member Buford White. After member Sandi Davis showed concern that the Club was not doing enough community service, White suggested the project; he suggested it two days before his death in 2016.

The program involves the club donating the toys, some of which have been bought by members, others being donated, to law enforcement and emergency services, who then give them to children that have been involved in accidents or traumatic events. They have done this every year since 2016, with the exception of last year due to COVID. They have donated 826 stuffed toys total since the program began.

The next big event for the Decatur Lion’s Club is a Boston butt sale fundraiser, scheduled for the Friday before Memorial Day.