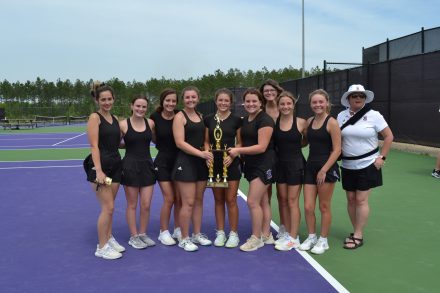 Above, the Lady Cats tennis team holds up their trophy with Coach Amy Thomas.

Bainbridge Bearcat Varsity Tennis Teams brought home a region championship on Wednesday afternoon after a dueling day on the courts.

The day started off with an automatic win after Dougherty County’s number two doubles forfeited against Aiden Tabb and Lucas Reynolds.

With only two more wins necessary, number one singles Robert Bryan Shockley took the court first against Dougherty County’s Kaleb Hudson, where he won in a dominant 6-0, 6-0 fashion.

Shockley’s brother and number two singles, Thomas Shockley was in the midst of beating Landon Hill, 6-0, 3-0 when he was pulled off the court.

Shortly after the Bearcats finished up their matches, the Lady Cats took the court to face off against Dougherty.

Number one singles Riley Palmer was then pulled, but was currently winning 6-0, 3-0.

A few hours later, the Bearcats were back to face Thomas County.

Coming off a forfeiture, Tabb and Reynolds pulled out a win 6-1, 6-1 against Joshya Williams and Caleb Kinnear.

Finally, the Lady Cats got back on the courts for one last matchup against Cairo.

Palmer got the first win 6-2, 6-2 against McKenzie Wilburn, while Thomas and Hall beat Hailey Jones and Mollie Grace Meredith 6-3, 6-0.

Loeffler and Wade closed out the day with a Region Championship win against Alexis Gray and Lily McKenzie 6-0, 6-1.

Coach Amy Thomas could not have been more excited for the team.

“We didn’t have a region tournament last year,” she said. “So going in, we knew that we would have some athletes that this would be their first outing.”

However, Thomas said the team stepped up to the plate and showed out.

“I’m so proud of them and what they’ve accomplished this year,” she said. “I’m just looking forward to see how deep they can make it in the playoffs.”

“It’s an exciting time to be a Bearcat,” she said. “It’s our motto: excellence for all and we’re showing out in sports this year.”

Going into state, Thomas said most of the teams are not ones they have seen before or haven’t played in many years, because of the school’s reclassification.

However, Thomas is confident in the players and ready to see what they bring to the court.