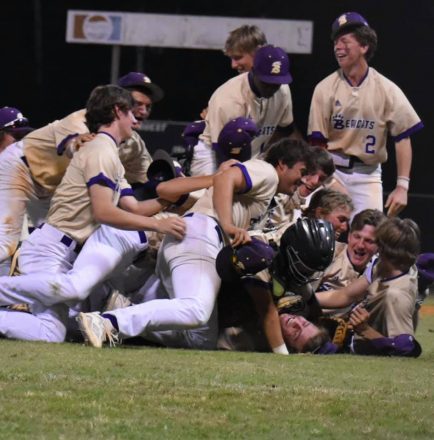 Players run in and tackle Quayde Hawkins after he pitches the final out against Dougherty County on Friday night, making the team region champions.

The Bearcat Baseball team faced off against their final region opponent of the season, Dougherty County on Friday night in a doubleheader, where the Bearcats won and brought home their first region championship since 1984.

The first game of the night, the Bearcats dominated 11-1.

The Bearcats got on the board in the top of the second inning, when they drove in two runs.

With two outs on the board, Quayde Hawkins was walked, bringing home Poitevint.

The Bearcats found the scoreboard again in the top of the fourth, when they drove in six more runs.

Pitcher Dewey Brock was first up to bat in the inning, where he singled. Courtesy runner Josh Beachem stepped in for Brock.

Conder then singled, reaching second base while Hawkins was up to bat.

Nolan Barr then stepped up to the plate, singling and reaching second on a throw from left field.

Will Beckham singled, scoring both Hawkins and Barr, giving the Bearcats a 6-0 lead.

Courtesy runner Bo Smith stepped in for Beckham, stealing second while Colton Harrell was up to bat.

Harrell was then walked before Pointevint doubled, scoring Smith and Harrell.

The Bearcats scored again in the top of the fifth inning.

Conder was walked and stole second base while Hawkins was up to bat. Barr then hit a sacrifice fly, bringing in Conder.

The Bearcats got their final two runs in the top of the seventh inning.

Hawkins was first up in the inning and was walked before Barr hit a fielder’s choice.

Beckham then hit a fly ball and was able to reach first on an error by Dougherty’s center fielder. Smith stepped in as Beckham’s courtesy runner.

Harrell was then walked, but allowed Barr to score in between pitches.

Dougherty scored their lone run in the bottom of the seventh inning.

Brock earned the win for the Bearcats, allowing two hits and zero runs over five innings, striking out 11 and walking one.

The Bearcats then went on to win their second game 20-2.

The Bearcats snagged a late lead in order to defeat Dougherty. The game was tied 2-2 with the Bearcats batting in the top of the second, when Hawkins singled on the first pitch of the at bat, bringing in two runs.

Barr was only one of many to score in the second inning, when the Bearcats pulled away for good, with 17 runs.

Hawkins took the win for the Bearcats, lasting three innings, allowing two hits and two runs, while striking out eight.

The Bearcats will now play Liberty County on Thursday at 6 p.m. at home for their Senior Night game and begin playoffs with a team from Region four next week.