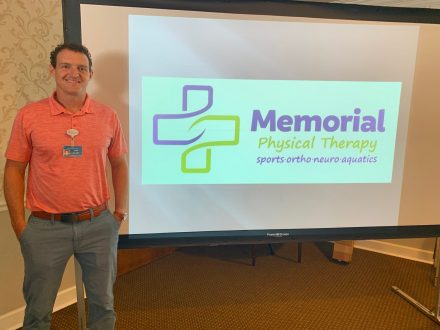 Daryl Hall of Memorial Physical Therapy spoke to the club about falling and how to reduce the risk of falling around their home.

Daryl Hall, DPT at Memorial Hospital and Manor Outpatient Physical Therapy Department spoke to the Bainbridge Rotary Club this week on the subject of falls.

Calling it the other four-letter word, FALL is a big word and topic in the world of physical therapy.

He first gave some hints on ways to possibly prevent falls, beginning with making changes around the house, removing obstacles that frequently cause falls. He cautioned about loose rugs, advised about holding on to rails at stairways and to always use a light when getting up in the dark.

He described how the members of his department do a screening on each referred patient to determine those most prone to falling. He then asked Rotarians to stand up without using their hands, then to stand on one foot for five seconds. Those who are unable to stand that way are considered 2.1 times the risk of sustaining injuries from falls.

He said the fix for that was to improve your balance before falling, adding that many are preventable. He outlined a phase called the Fall Cycle, where a person falls, then due to fear of falling again, they become less active, which in turn deceases muscle strength and balance, with the result of an increased risk of falling.

“Break the Cycle,” he says, and that is where PT can help. Exercise strengthens limbs and muscles.

Balance is affected by vision (the eye), vestibular (hearing – ear) and proprioception (the unconscious perception of movement and spatial orientation arising from stimuli within the body itself).

The older we get the less proprioception there is, resulting in decreased neuromuscular control of limbs. Older people often have impaired balance, thus higher chances for falls.

Hall then showed a portion of his video presentation how physical therapists assist patients to develop stronger balance and limbs. They do functional reaches, single leg stances and other specialty exercises, always being supported by therapists to prevent falling. Some of these can be and should be continued at home and an app is offered free on your phone that shows what you can do at home to continue the work. “Practice makes perfect,” said Hall. The app info can be found at www.my-exercise-code.com.

He agreed that some conditions such as dementia or other physical disabilities may not respond to the balancing training.

Hall has been with the Memorial Physical Therapy Department since 2012. It is located in the Medical Office Building on Wheat Street.