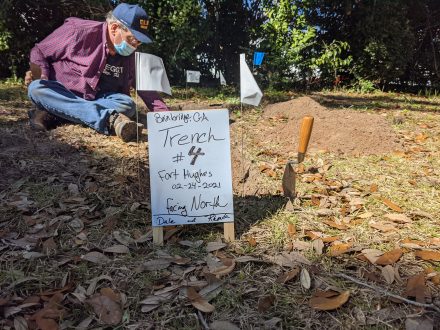 Dale Cox puts out a marker where the trench at Fort Hughes used to be.

Bainbridge is a town with a rich history, dating back centuries. One piece of history that lies buried beneath Chason Park is Fort Hughes, an outpost of Fort Scott that saw action in the Seminole Wars. While the Chason Park expansion project continues, archeological excavations are ongoing in the historic area of Chason Park, north of the construction. Dale Cox, one of the historians working on the dig, explained what exactly has been unearthed so far.

“We have been conducting test excavations along the south wall of Fort Hughes to locate its exact position,” Cox said. “So far, we have located several sections of the footing trench of the wall, the southwest corner where we believe one of its two blockhouses was located, a potential fire pit area, burned parts of logs from the wall, and traces of bases of the original upright logs from stockade walls.” The discoveries don’t end there. He continued, “We have found a few musket balls, part of a ramrod from a muzzle-loading weapon, pieces of melted lead, and a lot of charred wood.” Cox attributes the charred wood to the fort being burned after the Army evacuated it in 1817.

When asked if the park expansion project threatened the remains of the fort, “The current expansion project does not threaten the archaeological remains of Fort Hughes at all. The traces of the fort that we have located are north of the area where the work is taking place and are in the historic Chason Park area that is being preserved,” Cox said. “The City of Bainbridge has been very respectful of the site, and I applaud their interest in preserving it to make sure that no damage is done to any of the historic remains.”