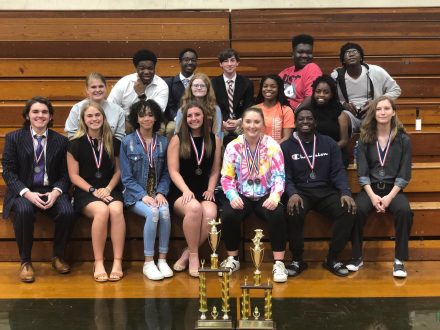 The BHS Literary team smiles after bringing home another region championship to an already amazing week at Bainbridge High School.

Saturday afternoon, the Bainbridge High School Literary team competed for the region championship against area schools. This is the first year literary has been recognized as GHSA sport, and BHS was proud to call themselves the first 4A region champions.

Loeffler, Floyd, Kincaid and Robinson will now go to state this Saturday in hopes of bringing home a title.

“We are now competing in another region, but we’ve had a great time competing in this region,” she said. “It feels good to compete against other schools, who compete like we do; it’s much more balanced.”

However, the wins in this completion, Powell attributes all to her students.

“A lot of this competition is not something I can prepare them for,” she said. “I give them materials to practice on, but a lot of the work they do themselves.”

Going into state, Powell feels like the team’s chances are good.

“I feel really confident,” she said. “We have a good chance with these really talented seniors.”

Loeffler is one of these seniors. Her final solo will be two pieces. One will be a sull’aria from Mozart’s The Marriage of Figaro, while the other will be a piece from the musical Carousel titled “If I Loved You.”

Powell wishes all her seniors luck and said she and her co-sponsor Mr. Poppell are immensely proud of the team.