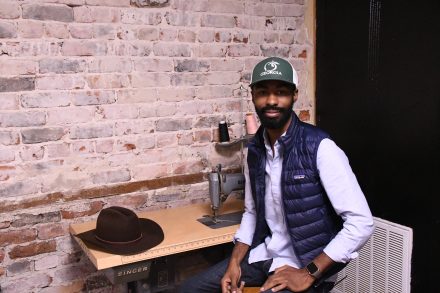 Eldrick Jacobs sits at his old Singer Sewing Machine after lining the inside with llama leather.

Eldrick Jacbos of Bainbridge has many passions, among them is the lost trade of millinery.

Jacobs grew up in Bainbridge spending his high school years sketching clothes and accessories at The Bean that he would then sew and design himself.

He went on to graduate from BHS and attend Georgia Southern, where he pursued a degree in History.

Following his graduation, Jacobs went to Vanderbilt for graduate school, completing a degree in religion and social ethics.

While living in Nashville and attending Vanderbilt, Jacobs said he still had a passion for aesthetics, color and texture. He said he enjoyed noticing how people around the town accessorized themselves and really put passion behind their clothing to express who they were, especially with hats.

Upon completing his degree, Jacobs went to work in the non-profit sector, where he spent five years, before moving to Cleveland, Ohio in the winter.

“The weather was no joke, so while I was in Cleveland I bought my first hat,” he said. “I spent a significant amount of money on this hat and so I began researching why the cost and learned about the different quality of hats and price points.”

That’s when everything clicked with Jacobs and he used his love of history to really dive into the history of hat making.

While researching in Cleveland, Jacobs said he met a hat maker, who showed him some basic skills and from there it was “off to the races.”

Jacobs then began taking classes to learn how to produce quality hats, which he said was difficult, considering hat making is a small guild and a dying craft.

“There has been somewhat of a resurgence, though instead of a mass produced fast fashion piece,” Jacobs said. “That really speaks to me and is what I’m doing here and speaks to intentionally crafted sustainability and American produced pieces I’m creating.”

The pieces Jacobs creates are made of beaver and rabbit fur felt, along with some straw as a medium.
The hats are custom made to fit the customer.

The process begins with a 30 minute- 1-hour consultation, where Jacobs has a conversation with the customer about what they want this hat to be. He said they discuss what type of lifestyle the customer has and will it be used for outdoors work or utility work or is it a fashion piece. He allows the customer to feel the different materials and pick out colors, before measuring them and sending them on their way.

Jacobs then works on sourcing the materials and blocking the hat. Once the hat is blocked, Jacobs will bring the customer back and discuss with them how the hat fits and feels. He then finishes the hat and allows them to take it home.

The process can take approximately five weeks, depending on how many customers are ahead in the queue.

“When I’m building a hat, I’m trying to take into consideration the undertones of the skin and the fact our heads aren’t exactly oval,” he said. “Every hat is hypersensitive to you.”

However, the hats are water resistant and made from high quality materials.

“You’re buying a piece of wearable art,” Jacobs assured. “It’s something you can wear for a lifetime.”

However, there will be a ready to wear line in the future, once Jacobs launches his website. There, customers can pick out the color and trims and come in for a measurement.

For now, though, Jacobs has been ecstatic with the feedback. He already has a completely full queue for the rest of the month, but is accepting appointments for May and June.

Starting on Thursday, his brick and mortar location will be open for booking appointments.

“I’m here to serve my community and strategically build relationships with people,” he said. “It’s been wonderful so far and I’m really blessed with the tremendous support here in Bainbridge.”

For those interested in supporting Jacobs or entering into the queue, visit flintandportco.com.

He looks forward to serving everyone in Bainbridge and the surrounding area. His retail location can be found at 219 E. Water St.