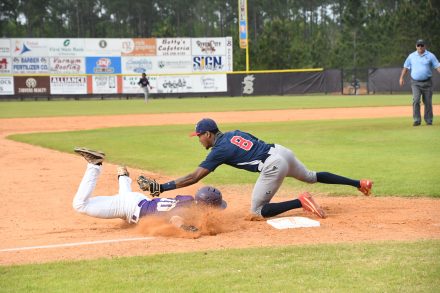 Nolan Barr slid into third base during the Bearcat’s first game against Westover on Thursday. He was announced safe on a controversial call by the referee.

Playing a day early due to weather, might throw off some, but it made the Bearcats come out that much stronger.

The first game resulted in the Bearcats run ruling Westover 15-0.

The team came out electric, scoring six runs in the bottom of the first inning.

Michael Conder was the first up to bat, singling on a line drive. He was then able to advance to third during two wild pitches to Quayde Hawkins, who was eventually walked.

Nolan Barr then stepped up to bat, where he was also walked.

With one out, Colton Harrell headed to the plate. He then singled, bringing in Hawkins.

Jackson McCullough also hit a fly ball, but was able to reach on error by Westover’s left fielder, scoring Barr.

The Bearcats could not be stopped.

Dewey Brock then doubled out to center field, scoring Harrell and McCullough, giving BHS a 5-0 lead. Josh Beachem stepped in for Brock as a courtesy runner.

Connor Poitevint rounded up the inning with a double, scoring Beachem

The Bearcats continued to score in the bottom of the second inning, scoring two more runs.

Hawkins began the inning with a double before Barr singled, scoring Hawkins.

Beckham also singled. Harrell then got out on a sacrifice fly to second base, but allowed Barr to score.

The Bearcats finished off the game in the bottom of the third inning, scoring seven runs.

Jase Godwin started the third inning off with a single, followed by Pointevint also singling.

Beckham headed up to the plate, where he singled, scoring Conder. Harrell followed this lead, singling and bringing in Barr.

Bo Smith stepped in as a courtesy runner for Barr and was soon headed to home plate when McCullough singled, bringing in Smith and Harrell.

With a 13-0 lead, Brock was then walked and Godwin was hit with a pitch.

Finally, Pointevint singled, scoring both McCullough and Brock’s courtesy runner Beachem.
The second game followed a similar pattern with the Bearcats run ruling Westover by the bottom of the third inning.

The team started off strong in the bottom of the first inning, driving in four runs.

Barr started things off for the team, doubling, before Beckham was walked.

Beachem then stepped in for Beckham as a courtesy runner throughout the rest of the game, as Harrell was heading up to the plate.

McCullough then took the batter’s box, where he also singled out to center field. Due to an error by Westover’s right fielder, Beachem was able to score.

To end the inning, Pointevint singled, bringing home Harrell and McCullough, giving the team a 4-0 lead.

The Bearcats continued to bring in run after run in the bottom of the second inning.

The inning began with Drew Clayton being walked by Westover’s pitcher.

Conder then singled and allowed Clayton to advance to third on a wild pitch.

Hawkins was also walked, however Smith came in as a courtesy runner.

With all the bases loaded, Barr stepped up to the plate and hit a sacrifice fly to right field, bringing in Clayton.

With an 8-0 lead, the Bearcats finished the game in the bottom of the third, scoring 7 more runs.

Godwin was first up to bat in the bottom of the third, where he was walked.

Clayton then hit a fielder’s choice, which resulted in the out of Godwin.

However, Smith was up to bat next and singled on a ball to left field, scoring Clayton.

Hawkins then doubled as Griffin Perkins stepped in as courtesy runner for him.

The Bearcats quickly changed the batting lineup and Beachem took over the batter’s box, where he singled, scoring Smith.

William McCorkle then singled, allowing for Perkins to score during a wild pitch. McCullough also singled on a hit to center field and allowed for Beachem to score on one of the wild pitches he received.

The game came to a close after Pointevint tripled, scoring McCorkle and McCullough and scoring himself during a wild pitch to final batter Cason Priest.