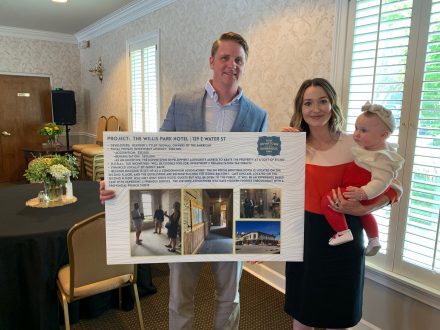 The Tyler Thomas family, including baby Ruby, were guests at Bainbridge Rotary this week. He is holding a photo board display of the Willis Park Hotel project.

Last week’s Rotary program was presented by the Downtown Development Authority. This week the program was given by one of the major developers, Tyler Thomas of The American – considered by many as the impetus behind all the new growth – who gave details on what it is taking to keep the ball rolling.

He spoke specifically of the Willis Park Hotel being developed on the corner of Broad and Water Streets.

Thomas said after they had The American restaurant going he and his wife Heather thought it would be good to have more downtown short-term lodging available. They purchased the building from the DDA and after learning that the history of the building included it being called the Park Hotel in the 1920’s, they decided on the name Willis Park Hotel in recognition of it overlooking beautiful Willis Park.

They closed on the property six weeks before Hurricane Michael roared through Bainbridge. “It cost us a year” in development, said Thomas because there was so much damage and contractors were too busy. They began again, then along came the COVID-19 shutdown. They carried on as best they could with the restaurant by using take-out, then there was a fire in January. Thomas granted that the fire was well handled and controlled and major damage avoided.

To bring us up-to-date, he expects about two more weeks of construction, then two to three weeks to get everything in place and set to open a six room boutique hotel, with full-time management and Cafe St. Clair in the back that will offer pastries, snacks and a juice bar. He anticipates a May opening and will have an open house to introduce it to the public. “We have wanted to keep the original historic elements of the building and the new lighting etc. gives a new kind of blend of contemporary with antique.

He spoke of how happy they are to have been able to help create a hospitality community downtown. “We are seeing 300 to 600 new faces from out of town who want to be able to stay downtown and walk around and enjoy the historic district.” They also see a need to expand the food offerings.

“We’ve got this almost rounded up,” he said, speaking of the hotel.

“Before we had all these other challenges, we thought we would take on another project.” They purchased the former China Buffet Building on the opposite corner and expect to start construction work on that in late summer or early fall. It will be a restaurant called the Deep South Sushi Bar, also offering oysters. Upstairs there will be two apartment style hotel suites.

Thomas concluded by speaking of the many other renewal projects undertaken by others in the business district as well as the restoration of historic homes, and how happy they are to see it all happening and working.