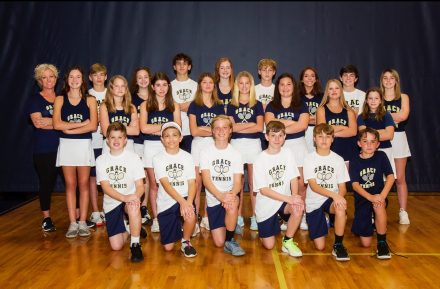 The GCA Middle School Tennis Team smiles after coming out undefeated this season.

The GCA Middle School tennis team finished their season last Thursday, going undefeated even when facing off against schools like BMS. This means the team will, for the first time, be going on to compete at the state level. Coach Christi Murray told the Post Searchlight more about the season.

“It’s all about the kids,” she said. “They show up and show out, and give 100% on the courts.” Despite an undefeated season, there were a few close calls, the closest being earlier this month, with a game against BMS on March 8th. “The girls and boys both pulled a win 3-2,” Murray said, though they would make up for the close call. “When we played them again on March 25th, both girls and boys won 4-1. Since it was our last game of the season, we were happy to leave on a high-note.”

She went on to praise the teams for their work this season. “I am so proud of these kids. They have all worked so hard on and off the courts, but for us it’s not just about winning. It’s about who you are as a person and how much time and effort you want to put into this to grow.”

For state, the team will be facing off against all other region winners under the Georgia Association of Private and Parochial Schools (GAPPS).

“We practice every Tuesday and Thursday during the season. All of my players have shown tremendous improvement,” Murray said. “I absolutely love to help these kids grow mentally, physically and spiritually.”