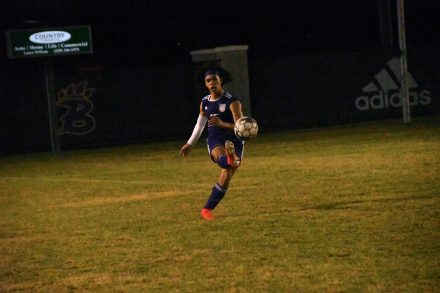 A Varsity Bearcat kicks in the ball on Senior night, hoping for a win.

On March 12 the Bearcats hosted Harris County at Centennial field, and in a spirited contest two late goals, by the visiting Tigers, resulted in a 3-1 Harris County win.

Bainbridge Senior Jose Avalo scored a goal, in the 12th minute, to give the Bearcats a 1-0 half time lead.

On the attack Avalo received a pass just above the Harris County Penalty box from Bearcat Junior Juan Becerra, and finding space quickly turned and lasered a 25 yard shot between three Tiger defenders and the goalkeeper at the near post.

But in the second half the visiting Tigers were able to score three goals in the 46th, 67th, and 74th minute to leave with the 3-1 victory. The latter two goals came on well placed lofted shots from 23 and 30 yards out
Bainbridge then travelled to Thomasville on March 16th and battled the Thomas County Yellow Jackets, but came away with a 4-0 defeat.

Just two minutes into the contest the Yellow Jackets were awarded a penalty kick in the Bainbridge penalty area and scored quickly to take a 1-0 lead.

Thomas County struck again with just ten minutes remaining in the half with a goal from six yards out to take a 2-0 halftime lead. Thomas County scored two more goals in the second half to take a 4-0 victory.

In both games Bainbridge battled throughout and had several near misses on several chances and are commended for their efforts on the field.