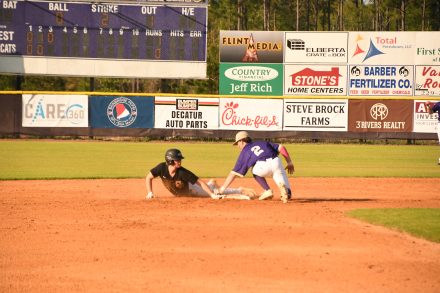 Connor Poitevint (2) tags second base in time to hopefully get out a Colquitt County player.

Colquitt County was first on the board, when they got a run in the top of the second inning. However, the Bearcats made up for the run in the bottom of the third when they brought in two runs.

Dewey Brock was first up to bat and hit a fly ball, reaching first on an error by Colquitt County’s right fielder. Nolan Barr stepped in as Brock’s courtesy runner for the remainder of the inning.

Quayde Hawkins then hit a single. With two outs, Colton Harrell stepped up to the plate and hit a single, scoring Barr.

With one run on the board, Will Beckham then singled, bringing home Hawkins.

The Bearcats took the lead for good in the bottom of the fourth inning, scoring eight runs.

Ryals Burch was the first to bat in the inning, where he was hit by a pitch.

Jackson McCullough then singled on a line drive.

Brock stepped up to the plate and singled on a bunt. Following Brock, Connor Pointevint hit a fielder’s choice, which led to the out of Burch as he advanced home.

With a 6-1 lead, Harrell added to the excitement and hit a home run, bringing in Hawkins and himself and upping the lead to 8-1.

Bo Smith singled, however he was able to make it to second on an error by Colquitt County.

Burch also singled on a line drive. McCullough then entered the batter’s box and singled, scoring Smith and Burch.

Colquitt County attempted to make a comeback in the top of the sixth inning, scoring two runs. However, the Bearcats sealed the deal in the bottom of the sixth, bringing in one last run.

Chase Parker hit a grounder and reached second on an error by Colquitt County’s shortstop. Cason Priest then singled, advancing Parker to third.

Gavin Steptoe took the loss for Colquitt County, allowing five hits and six runs over three and a third innings, striking out two and walking one.

“I was pleased with our performance” Head Coach Donnie Coxwell said. “It was the first day of Spring Break, plus we were coming off two huge games against Thomas County Central on Friday night and we could have had a letdown, but Dewey Brock did what he has done all year for us, threw strikes and got people out. Our bats stayed hot, it was a good win for us.”

While the Bearcats had a successful game against Colquitt County, they came up short against Lee County the following night.

McCullough took the loss for the Bearcats. He surrendered three runs on five hits over three innings, striking out six, while Smith Pinson earned the victory for Lee County. He went five innings, allowing zero runs on three hits and striking out six.