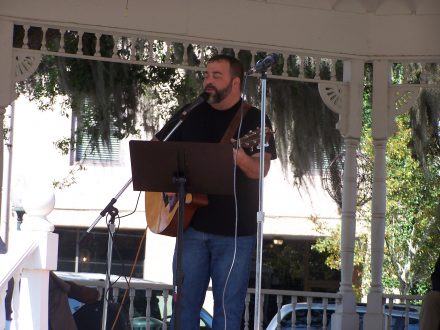 Tim Langdon of Connection Church leads worshipers with a rendition of “The Old Rugged Cross.”

First Christian Church Pastor Mike McCrikard opened up the service with a greeting and prayer, before Connection Church Music Minister Tim Langdon played some hymns on the guitar for individuals to sing along to.

Following a worship in song, Rev. Melissa Traver of First United Methodist Church read the passage of Jesus’ triumphant arrival into Jerusalem. All were invited to stand as she read the Gospel of Luke chapter 19 verses 28-40.

“After Jesus had said this, he went on ahead, going up to Jerusalem. As he approached Bethphage and Bethany at the hill called the Mount of Olives, he sent two of his disciples, saying to them, “Go to the village ahead of you, and as you enter it, you will find a colt tied there, which no one has ever ridden. Untie it and bring it here. If anyone asks you, ‘Why are you untying it?’ say, ‘The Lord needs it’.” Those who were sent ahead went and found it just as he had told them. As they were untying the colt, its owners asked them, “Why are you untying the colt?” They replied, “The Lord needs it.” They brought it to Jesus, threw their cloaks on the colt and put Jesus on it. As he went along, people spread their cloaks on the road. When he came near the place where the road goes down the Mount of Olives, the whole crowd of disciples began joyfully to praise God in loud voices for all the miracles they had seen: “Blessed is the king who comes in the name of the Lord.” “Peace in heaven and glory in the highest!” Some of the Pharisees in the crowd said to Jesus, “Teacher, rebuke your disciples!” “I tell you,” he replied, “if they keep quiet, the stones will cry out.”

Hines said that one thing that stood out to him in this verse was that Jesus was declaring himself as God. Jesus knew that there would be a donkey at that location and he knew the donkey would be unridden and knew there would we questioning. He even knew what the disciples would need to respond in order to get the donkey.

“Jesus was declaring his deity, his Godness,” Hines said. “He was also declaring that He was king.”

Hines reminded people that during that time, when there was a processional of that nature, it indicated power and royalty. This type of power also was deemed as a threat to the Pharisees, who would eventually turn Jesus over to the Roman Empire.

Hines eluded to the verse Traver read and pointed out that Jesus told the Pharisees if the people did not worship him, the stones would, because all of creation worships God and He is God.

Hines then pointed out another passage that said Jesus wept over Jerusalem, showing his compassion for God’s people.

“He has cared for the whole world,” Hines said.

Hines said Jesus knew at the time that the people did not have peace and suffered from much unrest, as we do now.

Hines encouraged everyone who may not feel at peace or feels their life is not whole, to turn it over to Jesus because “He brings peace for today.”

“When we do this we think about what brings Jesus happiness and pleasure and not our selfish desires that create anxiety,” Hines reminded everyone.

After encouraging everyone to turn their life over to God, First Church of God Pastor Rick Kohl spoke on Jesus’ final words, “It is finished.”

He explained these final words were not ones of failure or that he could not complete his task, but that His words were words of a King standing in defiant victory over a world that sought to destroy Him.

Jesus’ final words were spoken on the cross, to which He was nailed. However, He rose again from the dead three days later on Easter Sunday, which is what First Baptist Church Pastor Chris Humphries ended with.

“When we leave this world, we have comfort that we will see Jesus again,” Humphries said.

The poem details how Death believes he the ruler of all fate, but once Jesus comes along, he begins to grow tired and weary.

Death has realized he holds now power, but Jesus holds it all and he is a merely a gatekeeper to helping people reach the true destination of Jesus’ kingdom.

Jimmy Adamson of Friendship House ended the program with a closing prayer and wished everyone a Happy Easter.