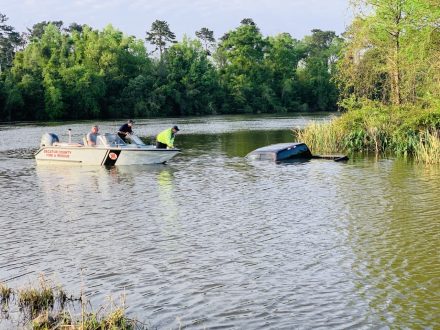 On Thursday, April 1, Bainbridge Public Safety, Decatur County Fire and Rescue, Decatur-Grady EMS, the Decatur County Sheriff’s Office and the Department of Natural Resources were dispatched to the Bainbridge Marina in reference to a truck partially submerged in the river.

Upon arrival, First Responders could see the truck almost completely covered in water and located next to the “island” of land near the end of the boat ramp.

Efforts were made to reach the truck, when investigators realized there was a man inside deceased.

BPS investigators and Deputy Coroner Dewitt Phillips worked the investigation in conjunction. The man in the truck was later identified as Jesse Fudge, 80, of Florida.

Phillips said Fudge enjoyed driving around and getting out of his house, according to his family and had driven down to Bainbridge on Wednesday. Fudge was riding around when the storm began Wednesday night and pulled off to the side of the road and unfortunately did not realize the road stopped and drove straight into the water.

“He never put on brakes from what I can tell,” Phillips said.

Phillips spoke with others who were near the Marina and they told him they saw lights in the water and believed it was boat coming in from the storm. It was not until the next morning when the same lights were still showing they realized it was something else.

Phillips said Fudge did have some medical issues, but does not believe they played a part in his accident.

Phillips has since notified Fudge’s family and BPS offers their condolences during this time.