Rotary hears details of a thriving downtown during meeting 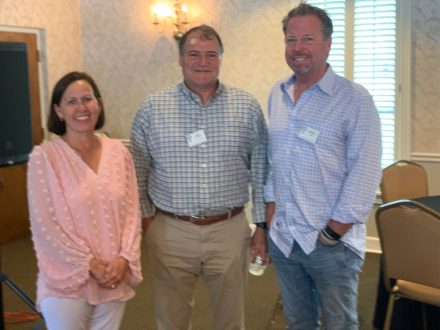 Director of Downtown Development, Amanda Glover, presented a detailed description of the growth occurring in downtown Bainbridge to the Rotary Club on Tuesday.

She began by saying the City would celebrate it’s 30th anniversary as a Main Street designated city, having become certified in 1991. She added that May is also designated as History Preservation month and that the City is developing a “then and now” video that will feature all the buildings that are being or have been redeveloped.

She quoted a $31 million dollar figure that has been invested by private and public entities in the units, and $13 million dollars achieved in property sales.

The City now has 40 residential units in the downtown, with five more currently under construction. She said the City receives calls daily from people seeking rentals and that the BonAir and the Callahan buildings especially have waiting lists.

Another feature for the month of May – National Bike Month – has inspired the City to undertake the installation of numerous bike racks around town. They are seeking sponsors at a cost of $300 per rack and have 15 locations spotted downtown. Each sponsor’s name will be located on a rack.

An update on some new businesses that have committed to opening downtown followed. A Veterinary Clinic will open with a Dr. Greenberg at 212 N. Broad Street, Café St. Clair will open in the upstairs of the Willis Park Hotel expected to open mid-May or beginning of June.

Glover said the city is really concentrating on the properties on N. Broad Street now as it is a major gateway to the downtown. She described the development of the site of the old livery stable that is now an event venue called the Hook and Ladder. She said it is being rented out for parties and events – even weddings. There is a playground across the street that has been furnished with playground equipment from the closed Elcan King Elementary School. The property across from the Hook and Ladder has been purchased and plans are underway to develop a food truck court, complete with tables and chairs.

Jennifer Cannon of J. Christine’s is planning to open a tearoom called The Elesian, behind her business. Another business opening will be called the Flint and Fort Hat Company on East Water Street. It will be making hats for retail and wholesale to cities like Atlanta.

Glover said she was so proud of the Bainbridge retailers and residents who were surveyed about their business during the year of the COVID -19 shutdown. “The retailers had better Christmas sales in 2020 than the year before. That’s huge.” she said, adding that people shopped local and supported local businesses.

Glover said the Tax incentive program that has been in place since 2018 has been a great asset to the development of the City.

Downtown events are scheduled to return under the direction of newly hired events planner, Randee Eubanks. The Second Saturday celebrations have begun and the date for April is the 10th. A Sunset Movie is planned for April 24.

When asked about the return of the Farmer’s Market, Glover said, “Maybe in the fall.” She also explained the continuing work on the Chason Park has resulted in Georgia Power working to relocate power lines and poles.

Glover closed by saying, “Bainbridge Downtown is thriving right now,” and that the growth and programs are known across the state. “People from other communities are coming to visit and see what all we have done.”