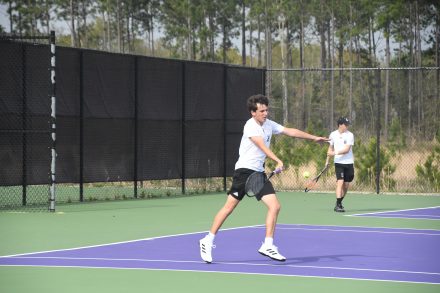 Jack Burke returns a serve during a match against Cairo’s number one doubles team.

The Lady Cats and Bearcat tennis teams faced off against region opponent Cairo on Thursday, where the Bearcats and Lady Cats got a full sweep.

Bearcats number one singles Robert Bryan Shockley took the court first, where he shut out his opponent 6-0, 6-0.

Number two singles Joseph Marshall then took the court and won 6-3, 6-2 against his competitor.

Number one doubles Brent Miller and Jack Burke hit the courts, winning 6-0, 6-4 with number two doubles Lucas Reynolds and Aiden Tabb finishing up the match with a 6-0, 6-1 win against their opponents.

Lady Cats number one singles Rylan Bland got things started with a 6-0 win in her first set, following up with a 6-2 win in her second set.

Number one doubles Anna Marie Hall and McKenzie Thomas were on fire, winning 6-0, 6-0.

Number two doubles Piper Loeffler and Brooklyn Wade finished off the day’s play with a 6-0, 6-1 win.

The team will now face Dothan High in one last non-region match on April 6 before the Region Tournament begins on April 13.