Back the Badge Big Bend lights up billboard for Capt. Justin Bedwell 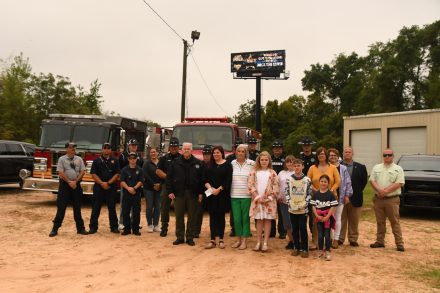 Deputies, family and friends gathered together for the reveal of the late Capt. Justin Bedwell’s new billboard in his honor on Tuesday.

Deputies gathered around Tuesday morning as Back the Badge Big Bend lit up a billboard for the late Captain Justin Bedwell, while his wife, Katherine, daughter, Maddie and mother, Georgia Bedwell were present.

Back the Badge Big Bend was a collective group effort, according to Brad Gray.

“Across the nation, law enforcement was being vilified,” he said. “We (myself and friend Homer) got together and said we have to do something.”

The goal was to originally create one billboard in Tallahassee thanking law enforcement. However, much to Gray’s surprise, the group raised enough money to create six billboards across Tallahassee.

The duo then heard about the tragic loss of Bedwell and wanted to do something.

“We immediately contacted Dana Bryant and the wheels got rolling,” he said. “We then reached out to Jeff Johnson, who was willing to offset the costs of the billboard and now this is the first of four billboards we will have in Cairo, Thomasville and Beachton. It’s only a small token of our appreciation.”

Katherine thanked Back the Badge Big Bend and spoke about her late husband’s dedication to the badge.

“Justin believed he was called to serve and protect and spent his days helping people know better, so they could do better,” Katherine said. “He lived under the weight of the badge without complaint and was grateful he found his passion.”

Katherine went on to say in the days following her husband’s death, everything was a bit of a blur, but she, her daughter and mother-in-law have felt the support and love of the community, family, friends and those she may never meet.

“Our local Blue Line family spoke the words, ‘SO9, we’ve got it from here,’ and put action to those words in a way I can never describe,” Katherine said. “The magnitude of their love for our family is remarkable and I’m truly blessed to carry on the legacy my husband left behind for his Blue Line family.”

Sheriff Wiley Griffin followed up Katherine’s statement by thanking Gray and Johnson for showing the support the citizens have for law enforcement.

“A lot of time our citizens are silent,” Griffin said. “But, they do support us; we’ve gotten cards from all over the United States because of the heroic actions Captain Justin Bedwell took.”

Griffin reiterated that the Decatur County Sheriff’s Office is a family and that they will continue to be there for Katherine, Georgia and Maddie.

“There’s no words that will comfort them for what they’re going through, but what you’re doing here today means an awful lot,” Griffin told Gray.

Bedwell’s step-daughter Maddie Chapman then shared some final memories of her dad.

“We liked to play jokes on mama and every day she would walk in the door we would say ‘she’s mad, definitely not in the mood today’,” Chapman said.

Chapman recalled one specific instance on April Fool’s Day where she and Justin filled up a bottle of bleach with blue Gatorade and drank it, much to Katherine’s surprise.

With these memories safe in her heart forever, Maddie can now look to the billboard near College Street to just remember how much Justin meant to not only her, but everyone who he protected.

For those who are interested in learning more about Back the Badge Big Bend, visit their Facebook page.