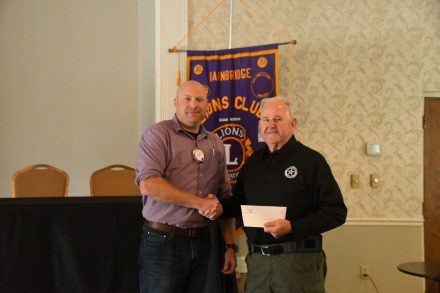 Sheriff Wiley Griffin accepts a donation from Jason Williams for the DCSO in honor of Capt. Justin Bedwell.

During their meeting, Lion’s Club President Jason Williams presented Vanstone and Sheriff Wiley Griffin with a donation in honor of the late Capt. Justin Bedwell.

Williams said when the Lion’s Club met to decide how they wanted to honor Bedwell, they first decided to donate to the library, due to Justin’s fondness of reading with daughter Maddie and Katherine’s profession as a reading teacher.

“I think this will be one of the best things we ever did,” Williams said.

Vanstone told Williams that with this $250 donation she plans to purchase children’s books that feature law enforcement officers in a positive light.

“They want to show kids that law enforcement officers aren’t bad; things happen, but kids can trust officers and confide in them,” Williams said.

Williams told the club that Justin was one of the officers anyone could trust.

Williams was previously a deputy at the Decatur County Sheriff’s Office and he said before he even joined, Justin offered him a chance to do a ride along.

“The first night I rode with Justin, he showed me where his mama and daddy lived and the next thing I knew Justin said ‘I hope you’re buckled up, because this is going to be a wild ride.’”

Williams said Justin always loved to teach, and that was one of his many teachable moments. For this reason, Williams felt like Justin would love the donation to the library because Vanstone also promised to purchase tapes for the visually impaired that will minister about law enforcement.

“It’s hard to know who to trust when you can’t see them, but this will paint law enforcement in a good light for them,” Williams said.

Following the Lion’s Club’s donation to the library, Williams then called up Griffin to accept a check on behalf of the DCSO.

“We want them to use this as a meal fund or convenience store fund so they can kind of talk about everything going on,” Williams said.

Griffin thanked Williams before getting emotional.

“We’ve gone through a hard time with Justin and all and small things like this mean a lot to us,” Griffin said. “We’ve got cards and letters from our brothers and sisters in law enforcement, but more than that we’ve gotten letters from citizens all across the country sending us their thoughts.”

Griffin said these letters detail what law enforcement means to the individual, and reminds Griffin that the people who want to defund the police are not a part of the majority.

Griffin recounted a recent interview with a new U.S. citizen who was asked, “What’s the greatest part about living in the U.S?” and the citizen responded “You can call 911 any time and they come immediately.”

Griffin said in some places they have to wait days for law enforcement to show up, but in the U.S., they can always be counted on.

Griffin thanked everyone for their support and promised they can continue to count on them in the days ahead.