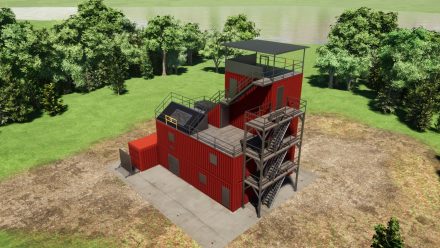 The rendering of a five-story fire training facility pictured above is what BPS would like to see their facility be built like.

Bainbridge Public Safety Fire Chief Doyle Welch is excited to announce the City of Bainbridge will soon be receiving bids to build a new state-of-the-art fire training facility on ten acres of land behind Home Depot.

Welch said the building will be a 5-story training tower, with the fifth floor being a repel tower so trainees can practice repelling. Each window will also have the capability of being repelled out of as well.

The roof will contain roof props that allow trainees to cut out holes in the roof and simulate ventilation. Trainees can then punch out the drywall in the ceiling to let the smoke out. This will be capable through the building’s smoke system, which Welch said they can set to smoke up the entire building or just one room of the building.

The five-story unit will also contain three burn rooms, with the total square footage being 4,160 square feet. The burn rooms will have a kitchen prop, living room and bedroom prop and bathroom prop in them.

Although these props will be burned often, Welch said they are designed to be quickly and easily replaced, even the punch outs in the roof.

“The good thing about the kitchen prop is it’s built into the system, so if it’s hit with a fire hose it won’t knock it over; it’ll be welded steel,” Welch said.

Other props will include a wall prop that simulates a fire in the wall, a maze that will shift often so trainees can constantly be tested, a confined space hatchet, a rafter simulator and more.

Welch said due to the amount of equipment being put in the training facility, these projects can often be expensive, which is why they plan to hire a contractor.

One of the costs Welch is looking into is a certain type of tile to go in the kitchen prop. The tile used in other facilities often has to be replaced due to cracks from the extreme heat of the fire and cool water. However, the one he is hoping to acquire would be welded and built with a new high-tech insulation, making the tiles only have steam come off them, but no cracks.

Welch said all the burn rooms will be certified burn rooms with two on the first floor and one on the second floor, allowing for trainees to do above and below grade fire checks.

While this seems like a massive undertaking, Welch said the site space is 10 acres, but the training facility will only use approximately 3.78 acres. There will be an additional storage space for firetrucks, along with two training classrooms and a bathroom out there as well.

Welch said he is unsure how long the project will take, he is hoping once the project goes out to bid, it would be completed by the end of this year or beginning of next year.

Welch is thrilled to begin training in the new facility. He said most everyone in the state of Georgia has to send their trainees off to Forsyth, but now with this facility BPS can offer a full Firefighter 1 training course.

“We are hoping to get people from Donalsonville, St. Mary’s, whoever wants to come,” Welch said. “We will bring in guest instructors and they will get the full experience. The training tower is going to attract so many people.”

Welch said BPS currently doesn’t have anywhere to train off of, but this facility will offer commercial and residential opportunities to train.

Welch hopes to put propane props, extrication props and 3D props one day in the future. For now, he is just excited to give all his employees this unique opportunity to train and trainees the opportunity to see what BPS has to offer.